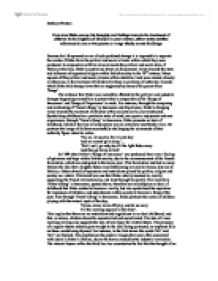 How does Blake convey his thoughts and feelings towards the treatment of children in the England of his day? In your answer, either make detailed references to one or two poems or range widely across the Songs:

How does Blake convey his thoughts and feelings towards the treatment of children in the England of his day? In your answer, either make detailed references to one or two poems or range widely across the Songs: Because his life spanned an era of such profound change it is impossible to separate the works of Blake from the political and social climate within which they were produced. In conjunction with his views towards the political and social state of Britain at the time, Blake's poetry also draws on his personal views towards the state and influence of organised religion within British society in the 18th century. Many aspects of this political and social climate within which he lived were related, directly or otherwise, to the treatment of Children by those in positions of authority, towards which Blake held strong views that are supported by many of his poems from 'Songs'. The evidence that Blake was incredibly affected by the political and industrial changes happening around him is patent when a comparison of his 'Songs of Innocence' and 'Songs of Experience' is made. For instance, through the comparing and contrasting of 'Nurse's Song' in Innocence and Experience, Blake's changing views towards the treatment of children within society can be clearly detected. ...read more.

The presence of a regular rhyme scheme gives weight to the ideal being portrayed, as emphasis falls on those words being rhymed. For instance, in the first stanza the words 'hill' and 'still' are rhymed. This emphasises the pastoral images that were often associated with ideals in Blake's lifetime, due to the havoc caused by the industrial revolution. The internal rhyme within the third line also accentuates the fact that the thought of an ideal childhood such as the one portrayed through this poem, is enough to set society 'at rest'; 'My heart is at rest within my breast'. Blake's 'Songs of Experience', produced in 1794, is the result of the outcome of the French Revolution, amongst other social revelations, witnessed by Blake. The French Revolution saw one form of repression and restraint replaced with another form, thus demolishing British optimism for a future free of oppression, and consequently Blake's. The absence of certain aspects of 'Nurse's Song' in Innocence, in 'Nurse's Song' in Experience clearly displays Blake's loss of hope for a future free of repression. The most obvious perhaps is the lack of mention of a new day, and so new hope. ...read more.

This not only demonstrates Blake's belief in the upholding of incorrect morals by organised religion, but also their neglect of their responsibility to protect the innocence of children, as clearly the child is unhappy; 'A little black thing among the snow, Crying 'weep, weep' in notes of woe!' Yet despite the 'woe' felt by this child, the church chooses to ignore it and rather gain praise from parents for teaching their child to fulfil their duty, however dangerous. Instead of presenting the central child in 'The Chimney-Sweeper' in Experience to be one in a world of innocence, as he does in 'Nurse's Song' in Innocence, Blake portrays a child in the cruel world of experience, which reflects his cynicism towards the negligence of society, politics and religion in their roles of protectors of the innocence of children. This belief of Blake's that authority figures within separate areas of society disregard their responsibility to protect children is best epitomised in the final lines of 'The Chimney-Sweeper' in Experience; '...are gone to praise God and his priest and king, Who make up a heaven of our misery.' ?? ?? ?? ?? Bethany Weston ...read more.