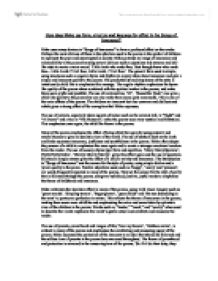 How does Blake use form, structure and language for effect in the Songs of Innocence?

How does Blake use form, structure and language for effect in the Songs of Innocence? Blake uses many devices in "Songs of Innocence" to have a profound effect on the reader. Perhaps the most obvious of these is the sybolism used in the poems is the symbol of children to represent the pure and uncorrupted in society. Blake portrays an image of innocence and vulnerablitlity in the poems by using several devices such as questions and answers and chil-like style to create a naive mood. 'Little lamb who made thee, Dost though know who made thee... Little Lamb i'll tell thee, Little Lamb, i'll tell thee'. The general form used is simple, using structures such as regular rhyme and rhythm to convey ideas about innocence and give a simple and innocent quality to the poems. The predictability and simpleness of the style is intentionally child-like to emphasise this message. The regular rhythm emphasises the hymn-like quality of the poems when combined with the spiritual matter in the poems, and make them seem joyful and youthful. ...read more.

The Introduction to "Songs of Innocence" sets the scence for the style of poetry, using simple diction and a lyrical quality in the poem. Positive adjectives used, such as 'happy', 'merry' and 'pleasant', are words frequently repeated in many of the poems. They set the scence for the idyll of perity that is followed through the poems, using two-syllabled, positive, joyful words to emphasise the theme of childhood and innocence. Blake reitterates the idealistic effect in many of the poems, using vivid visual imagery such as 'green woods', 'dimpling stream', 'happy groves', 'green fields' and 'the sun descending in the west' to portray an perfection in nature. This reflects the theme of innocence in the poems, making them seem more childlike and emphasising the naive and unrealistically optimistic view of the children in the poems. Words such as, "tender," "meek," and "woolly" when used to describe the Lamb emphasize the Lamb's gentle nature and comforts and reassures the reader. The use of parents, parent hood and images of this,'Near my bosom', 'Mothers smiles', is evident in many of the poems and emphasises the comforting and reassuring aspect of the poems. ...read more.

Many of the poems are very simple in their message but in his poems such as "The Chimney Sweeper" and "The Little Black Boy", a very political theme is apparant and the pedagogical tone emphasises Blake's message. The symbolism of black/white, pure/corrupted to express the injustices of society. The symbolism of soot, 'spoiling' the 'white hair' of the boy expresses Blake's concern about the repression of the young that is expressed in many of the opther poems. Similarly in "The Little Black Boy", 'I am Black, but O! my soul is white' and 'bereav'd of light' symbolise the purity and innocence of the young and uncorrupted against the sinnister and corrupted world. In "The Chimney Sweeper", his repetition of 'weep' emphasises the sorrow and compassion that Blake feels for the injustice. Both of these poems mirror symbolism found in the other as well as in the rest of the poems. Both use clouds as symbols of society's blind and unforgiving ways that stop the light of virtuousness and beauty from shining through. Both include images of lambs, a common theme throughout the poems to symbolise both God or Jesus and the innocence and purity in the world. ...read more.