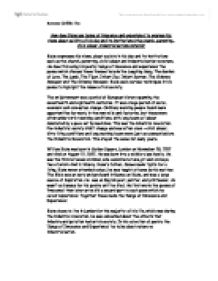 How does Blake use 'songs of innocence and experience' to express his views about solidity of his day and its institutions (the church, parenting

How does Blake use 'songs of innocence and experience' to express his views about solidity of his day and its institutions (the church, parenting, child labour, industrialisations nature)? Blake expresses his views, about society in his day and its institutions such as the church, parenting, child labour and industrialisation vs nature. He does this using his poetry 'songs of innocence and experience' the poems which discuss these themes include the Laughing Song, The Garden of Love, The Lamb, The Tiger, Infant Joy, Infant Sorrow, The Chimney Sweeper and The Chimney Sweeper. Blake use's various techniques in his poems to highlight the issues of his society. The enlightenment was a period of European history spanning the seventeenth and eighteenth centuries. It was a huge period of social, economic and conceptual change. Ordinary working people found more opportunities for work, in the new mills and factories, but these were often under strict working conditions, with long hours of labour dominated by a pace set by machines. This was the industrial revolution. Pre-industrial society didn't change and was often cruel-child labour, dirty living conditions and long working hours were just as common before the Industrial Revolution. ...read more.

The first and last line on the second stanza is repeated. In the first stanza he is asking 'who made you?' then in the second stanza he is trying to answer this. He uses repetition of 'little lamb, who made thee? Dost thou know who made thee?' this is questioning the reader, does the reader know god? This is also a rhetorical question; he also ends the first stanza with a rhetorical question. In the second stanzas he talks of Jesus, he talks of Jesus being mild and meek. 'for he calls himself a lamb. He is meek, and he is mild; he became a child.' Jesus is often referred to as a child in art and a lamb is often seen as innocent and a new life a fresh start in spring. 'The Garden of Love' is a song of experience. It has a rhyming structure of a b c b in the first two paragraphs then in the last paragraph, which has no particular rhyming structure to it. The name of the poem is ironic as this poem is about the church and the graveyard a graveyard is a place of death and decay, which is hardly a garden of love. ...read more.

He uses a simile to make the chimney sweeper boy sound innocent, 'curl'd like a lambs back' lambs are often used as a sign of innocence and also 'white hair' with white he is referring to blonde but white is also I sign of innocence. He uses the metaphor 'coffins of black' to say that children died in the chimneys. He also makes the children seem innocent with alliteration. 'Leaping, laughing' this makes me think of innocent young boys playing happily minding there own business. The last line 'so if all do their duty they need not fear harm' is ironic as many children were harmed. In conclusion the 1794 collection 'Songs of Innocence and of Experience' showed the two contrary states of the human soul. They show the contrary states by using two parts to each poem they do the 'innocence' side looking at the matter in a positive light, then they do a second part 'experience' where they look at the negative side of the matter. Blake used his work to express his views on industrialisation, nature, the church, parenting, and child labour. Considering this, Blake's poems didn't gain popularity until his later life. William Blake was one of the major romantic poets of England that influenced the romantic poetry movement. Roxanne Griffith 11m ...read more.