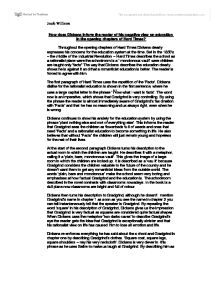 How does Dickens inform the reader of his negative view on education in the opening chapters of Hard Times?

How does Dickens inform the reader of his negative view on education in the opening chapters of Hard Times? Throughout the opening chapters of Hard Times Dickens clearly expresses his concerns for the education system at the time. Set in the 1850's - the middle of the Industrial Revolution - Hard Times describes the school as a rationalist place were the schoolroom is a ' monotonous vault' were children are taught only 'facts'' The way that Dickens describes the education clearly shows he is against it and that a romanticist education is better. The reader is forced to agree with him. The first paragraph of Hard Times uses the repetition of the 'Facts'. Dickens dislike for the rationalist education is shown in the first sentence, where he uses a large capital letter in the phrase 'Now what I want is facts'. The word now is an imperative, which shows that Gradgrind is very controlling. By using the phrase the reader is almost immediately aware of Gradgrind's fascination with 'Facts' and that he has no reasoning and us always right, even when he is wrong. Dickens continues to show his anxiety for the education system by using the phrase 'plant nothing else and root of everything else'. This informs the reader that Gradgrind sees the children as flowerbeds full of weeds and ones that need 'Facts' and a rationalist education to become something in life. ...read more.

This shows how rationalist he is and that he doesn't want to get personally involved. Also Cecilia is a very factual name, the one on her birth certificate; he doesn't want to call people by romanticist names and doesn't want the other children to be influenced by her. Dickens that shows that Gradgrind has to question Sissy more to find out why she is a romanticist and so that he can defend the rational beliefs on which he bringing up the other children. He discovers almost immediately when Sissy states 'It's father as calls me Sissy'; this makes Gradgrind think that Sissy's father is to blame and starts to question her father by asking 'what is your father?' the reader and Sissy presume that he is asking what her father does for a living, but if you look at the phrase you can nearly see that he is questioning her father as a person, asking her if her father is a monster and why he would bring someone up in such a romanticist fashion. Dickens continues to build on the contrast between Sissy and Gradgrind further down the page when he Sissy states that her father looks after horses in the circus. When Sissy says that he 'breaks horses in the ring' Gradgrind reacts almost violently stating 'you mustn't tell us about the ring here', this is because the circus ruing is a very free, creative and romanticist place where people doing what they like because they want to. ...read more.

By saying M'Choakumchild is looking at them like Morgiana, Dickens is saying that M'Choakumchild is killing them. Dickens aims when he wrote Hard Times were obviously to tell people what the education system was like and turn them against it, he showed this in his descriptions of the people and places in which the opening chapters are set. I think that Dickens was very successful in convincing the readers that a rationalist education is not right, before I read these chapters I had no idea about the world in the 1850's and Dickens has persuaded me that the world nowadays is better because we are romanticist's. By finishing the book with the conversation between Gradgrind and Bitzer, Dickens sums up the effects of the rationalist education perfectly. It seems the Gradgrind has discovered it is wrong and is asking Bitzer his opinion but when Bitzer says that a heart is 'relating to the circulation of the blood' Gradgrind thinks what ahs he done. This is ironic because it is the opposite to what he was like at the start of the book. I think that the fact that we are now studying fiction means that Dickens has achieved his aim, fiction is a very romanticist thing and one that people like Gradgrind in the 1850's would not have read. Now everyone is reading fiction and is not really fussed about knowing only facts, people know that there are many other things in life that are more important than facts. ?? ?? ?? ?? Jacob Williams ...read more.