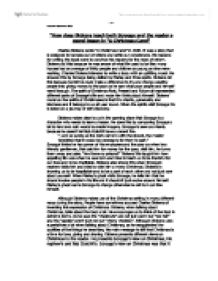 &quot;How does Dickens teach both Scrooge and the reader a moral lesson in &quot;A Christmas Carol&quot;.

"How does Dickens teach both Scrooge and the reader a moral lesson in "A Christmas Carol" Charles Dickens wrote "A Christmas Carol" in 1843. It was a story that is designed to harness our emotions and rattle our consciences. His reasons for writing the book were to convince his readers for the need of reform. Dickens did this because he was aware of what life used to be like: many houses had an average of thirty people and children as young as nine were working. Charles Dickens intended to write a story with an uplifting moral. He showed this by Scrooge being visited by Marley and three sprits. Dickens did this because he felt he could make a difference to try and change wealthy people into giving money to the poor as he saw what poor people and himself went through. The spirit of Christmas Past, Present and Future all represented different parts of Scrooge's life and made him think about himself. Dickens' moral on the spirits of Christmases is that it is charity, generosity and kindness and it belongs to us all year round. When the spirits visit Scrooge his is taken on a journey of self-discovery. Dickens makes clear to us in the opening stave that Scrooge is a character who needs to learn a lesson. He does this by comparing Scrooge a lot to hard and cold words to create imagery. Scrooge is seen as miserly because he doesn't let Bob Cratchit have a decent fire. ...read more.

This helps Scrooge think about how alone he is and that Christmas Day should be more than a normal day to him. Dickens uses Tiny Tim to make Scrooge think about how you should involve and value other people in your life and to treasure your friends. "Oh no, kind spirit, Say he will be spared." Here we see Scrooge changing and thinking more about other people like Tiny Tim and others that are not as fortunate as him. The spirit of Christmas present uses much irony when talking about Scrooge to show him what he had said and how he should change. "If he be like to die, he had better do it, and decrease the surplus population." Scrooge was "overcome with penitence and grief" to say that he is changing and he should be thinking of more than himself. Lastly, Scrooge is visited by the spirit of Christmas yet to come, who wears a deep black garment, which covers his head, face and form to represent Scrooge's future. Scrooge has been dreading the future the most as he thinks he's thinks he's too old to change, but he knows he should to help himself. "I fear you more than any Spectre I have seen." Scrooge knows he should change and finds out from the spirit of Christmas yet to come what people think about him. Although the spirit says nothing at all, Scrooge knows what he is expecting and what he will be like unless he changed. ...read more.

I think readers do learn a moral lesson and gain self-knowledge from the story because Dickens has used a very uplifting narrative that makes ourselves think about what we can do to change and what we can learn from how Scrooge has changed. Dickens' aim of the story was to convince his readers for reform and to create a story with an uplifting moral. I think he has successfully reached his aim as it made people think and re-examine our own priorities. My own reaction of the story is that it was an exciting narrative and I thought the ending of the story (stave 5) was very uplifting because you could see how Scrooge has changed and how he actually enjoyed Christmas for what it was. The moral lesson was that you should enjoy Christmas and there is always time to change. I thought that moral was very accurate and would make someone think about their actions and behaviour. In my opinion however, I don't think the book is as magical and special as it was when it first came out. I believe it is out-dated and doesn't help people learn from the book as much as it did. The fact that there are many different adaptations available each Christmas suggests it's still popular and wants to target a younger target audience to try and make Christmas more unique and supernatural. I still however think the book and film is archaic and doesn't create such an exquisite storyline as it did. - 1 - Heather Bosworth 10E2 ...read more.