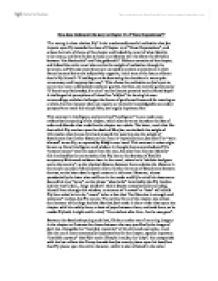 How does Dickens tell the story in Chapter 27 of Great Expectations?

How does Dickens tell the story in Chapter 27 of "Great Expectations"? "I'm wrong in these clothes, Pip" is the unashamedly tactful realisation that Joe imparts upon Pip towards the close of Chapter 27 of "Great Expectations", and echoes the train of theme of the chapter and indeed the novel of what identity truly means, and how for Joe at least, true identity will rise above the divisions between "the blacksmith" and "the goldsmith". Dickens narration of the chapter, and indeed the entire novel also carries the weight of realisation through its structure, as Pip's past experiences are narrated to present omniscience in their factual content but to the subjectively negative, ironic tone of the latent reflector that is Pip himself- "I had begun to be decorating the chambers in some quite unnecessary and inappropriate way". This allows the realisation on Joe's part to carry even more understated emotional gravity, his false, yet entirely gentlemanly "if there's any fault today, it's mine" carries intense personal and universal depth- it challenges his perceptions of himself as "old Joe" for leaving his own surroundings, and also challenges the theme of gentlemanliness and its meaning as a whole, but his character does not require an ironically knowledgeable secondary perspective to reach this simple false, yet hugely important fact. ...read more.

safely there, a sheet of paper between them, and ends there, as he evades Pip both in sight and in mind, "I hurried out after him... but he was gone". Between the detached opening and close, Dickens makes use of recurring imagery in the chapter to illustrate the chasm between the two, specifically the image of Joe's hat. Alongside the "insoluble mysteries" of his shirt and coat collar, much like the much more contextually important but for the chapter, equally important "insoluble mystery" that Pip's entire lifestyle is to Joe, the "play", the masquerade with the hat reflects the flimsy charade that Joe merely places upon his head, but that Pip places upon his entire character, which is also reflected in the rather "pettish", as Pip describes it, issue of "Sir", and the rather childish conversation that takes place over the "universal struggle" that takes place between the two due to "Estella being home"- in fact making the scene almost synonymous with that in front of the fire between Pip and Drummle further on in the novel- showing how Estella is a much greater influence than possibly perceived, driving a wedge between adversaries but also between two characters who are to the depth of sensibility, true ...read more.

Pip also sees Jaggers "already at it, washing his hands of them", a technique that Pip would so clearly like to employ of Joe before his arrival in London, that he felt of it "mortification". However, the fact that Pip cannot employ this technique leads to the small nuggets of appreciation that Dickens performs upon his nature, as if despite all that is seen to be wrong with him, he will never truly be part of that sector, of the "compounds of pride, avarice, brutality and meanness" that are the class that he aspires to, presenting both a view of positivity in his nature and negativity in his naivety on the subject, that in fact Pip is "wrong in these clothes" just as much as Joe, and that just as "an angel could not have concealed the fact that Barnard was crying sooty tears", no "coat-collar", no "decorations", will be able to conceal the pervading sense of questions of identity which permeate the chapter and indeed the entire theme of the differences, and also the underlying similarities, between the main opposition of "blacksmith" and "goldsmith" that Pip and Joe embody. ...read more.