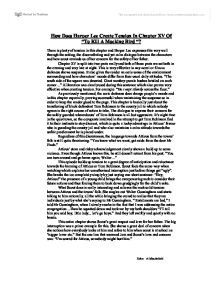 How Does Harper Lee Create Tension In Chapter XV Of &quot;To Kill A Mocking Bird &quot;?

How Does Harper Lee Create Tension In Chapter XV Of "To Kill A Mocking Bird "? There is plenty of tension in this chapter and Harper Lee expresses this very well through the setting, the discomforting and yet calm dialogue between the characters and how scout reminds us of her concern for the safety of her father. Chapter XV is split into two parts really and both of these parts are set both in the evening and very late at night. This is very effective in any novel or film as darkness shows suspense. It also gives the reader an eerie sense of the environment surrounding and how characters' moods differ from their usual daily attitudes. ...read more.

In their instincts to stay discreet, which is quite a lucky advantage in Atticus' favour who is guarding the county jail and who also maintains a calm attitude towards the unfair predicament he is placed under. Regardless of this discreteness, the language towards Atticus from the towns' folk is still quite threatening. "You know what we want, get aside from the door Mr Finch." Atticus' stern and risky acknowledgement clearly shows a build up to some violence. Even though Atticus knows this, he still doesn't retreat from his post. "You can turn around and go home again, Walter..." This episode builds up tension to a great degree of anticipation and reluctance towards the harming of Atticus or Tom Robinson. ...read more.

let's go boys." And they left swiftly and quietly with no hassle. This entire chapter shows Scout's great respect and love for her father. The big interruption was a prime example for this. She shows a great deal of concern when she notices how everybody looks at him and refers to him when scout is at school as "n****r lover etc." But the one line that summed Jem and Scout's love and concern was: "I'm scared for Atticus, somebody might hurt him." Chapter XV ends happily though with Scout's delight of seeing Atticus' affection for Jem who really needed it at his "difficult" age, simply by him messaging once through Jems' hair. Robert Mandefield ...read more.