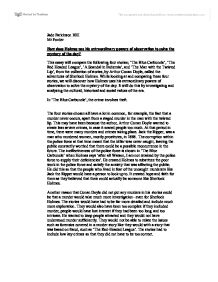 How does Holmes use his extraordinary powers of observation to solve the mystery of the day?

Jade Parkinson 10H Mr Forder How does Holmes use his extraordinary powers of observation to solve the mystery of the day? This essay will compare the following four stories; 'The Blue Carbuncle', 'The Red Headed League', 'A Scandal in Bohemia', and 'The Man with the Twisted Lip', from the collection of stories, by Arthur Conan Doyle, called the adventures of Sherlock Holmes. While looking at and comparing these four stories, we will discover how Holmes uses his extraordinary powers of observation to solve the mystery of the day. It will do this by investigating and analysing the cultural, historical and social values of the era. In 'The Blue Carbuncle', the crime involves theft. The four stories chosen all have a lot in common, for example, the fact that a murder never occurs, apart from a staged murder in the man with the twisted lip. This may have been because the author, Arthur Conan Doyle wanted to create less severe crimes, in case it scared people too much. At that period in time, there were many murders and crimes taking place. Jack the Ripper, was a man who murdered women, mostly prostitutes, in 1888. The corruption within the police force at that time meant that the killer was never caught, leaving the public constantly worried that there could be a possible reoccurrence in the future. The ineffectiveness of the police force is shown in 'The Blue Carbuncle' when Holmes says 'after all Watson, I am not retained by the police force to supply their deficiencies'. ...read more.

This meant that realistically the upper class were the only ones able to buy the magazine. Most importantly, the stories were often easy for the reader to relate to as London in the Victorian times was a dangerous place to be. Robbery's like the one in the Blue Carbuncle may have been quite common, as might the fraud in the Red Headed League. Victorian readers looked to Sherlock Holmes as a hero, because of the crime that had been taking place. This blew out of control, as the police forces were corrupt and the police officers were regularly being paid excessive amounts of money, to let people off the hook for crimes, and blaming people for crimes that they did not commit. This shows us the reader that the time that the stories were written, was a time in which people were desperate for a hero, or somebody who was uncorrupted who would help solve the crimes, and therefore they bought the magazines, because the stories gave them a sense of security, and peace of mind although the character was fictional. In order to create the hero that the people of Victorian London needed, he had to have a strong character. People did not need an average man; they needed someone that would be able to help them. In Sherlock Holmes, Conan Doyle had created a man that was extremely good at his skills of observing. ...read more.

The men would be allowed to go to the pubs, whereas the women would not. Men had many advantages over women, which was why it seems fitting that there are very few women roles in the book. There are no main roles for women either, which, although is frustrating nowadays, would have been a normal fact of life then. The only woman that played a key part in the story was Irene Adler. By using her, Conan Doyle showed the significance of women in society. He showed that women could be as clever and interesting as men. 'She has... the mind of the most resolute men'. He also proved that woman were smart and tough enough to be the villains and be the ones that victimize the men, 'She has a soul of steel'. Adler beats Sherlock Holmes and so Conan Doyle is saying that even the smartest man can be beaten by a woman. Conan Doyle may have been trying to show the value of women when he lets Sherlock Holmes be beaten by a woman. This is one of many examples where Conan Doyle purveys his cultural views. This essay aimed to show the cultural, historical and social values of four stories from 'The Adventures of Sherlock Holmes.' It has done this by looking at Holmes' extraordinary powers of observation. It shows how the issues in society at the time affected the way the story is shown and the way Holmes' powers of observation effect the stories. ...read more.