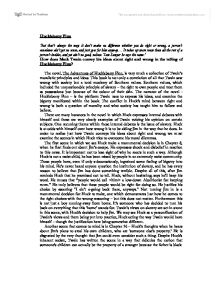 How does Mark Twain convey his ideas about right and wrong in the telling of Huckleberry Finn?

Huckleberry Finn 'But that's always the way; it don't make no difference whether you do right or wrong, a person's conscience ain't got no sense, and just goes for him anyway... It takes up more room than all the rest of a person's insides, and yet ain't no good, nohow. Tom Sawyer he says the same.' How does Mark Twain convey his ideas about right and wrong in the telling of Huckleberry Finn? The novel, The Adventures of Huckleberry Finn, is very much a collection of Twain's moralistic principles and ideas. This book is not only a correlation of all that Twain saw wrong with society but a total mockery of Southern values. Southern values, which included the unquestionable principle of slavery - the right to own people and treat them as possessions just because of the colour of their skin. The narrator of the novel - Huckleberry Finn - is the platform Twain uses to express his ideas, and examine the bigotry manifested within the book. The conflict in Huck's mind between right and wrong is both a question of morality and what society has taught him to follow and believe. There are many instances in the novel in which Huck expresses internal debates with himself and these are very clearly examples of Twain voicing his opinion on certain subjects. ...read more.

Another scene that comes to mind is in Chapter 16 - Huck's thoughts when he hears about Jim's plans to steal his own children, who are 'someone else's property.' He is disgusted by the very thought that Jim could even consider such a thing. Despite Huck's inherent r****m, Twain has written the scene in a way that ridicules the notion that someone's children can actually be the property of a stranger because the father is black. Following this we see Huck lying about Jim's whereabouts, which would otherwise see Jim returned to slavery. Huck chooses to 'go to h**l' rather than turn him in. We may see this as Twain making a mockery of Southern values, that it is a sin to be kind to black people, and a clear-cut statement on what Twain believes to be right himself, as opposed to the ridiculous sentiments of the South. Finally, one of the most definitive scenes within the novel in relation to what is considered right and wrong comes to pass in Chapter 31. Here we see Huck sit down and think about what he must do after Jim is sold by the con-men for $40. We see him again consider what he has been doing and whether he has made the right choices (quite similar to Chapter 16). ...read more.

He also tells us how 'the widow said it warn't anything but a soft name for stealing'. Here we see a funny comparison between the two ideas. Twain seemingly intended to remind us that Huck has a private set of moral standards. Despite these standards being unconventional, and sometimes laughable, he does try to live up to them, and that's the important thing to remember. Perhaps we could see this distinction as a lesser, yet quite relevant comparison to the issue of slavery. On one hand we see Huck's father saying nothing is wrong with it, yet on the other we find the widow condemning the action. This is really quite similar to how the North saw the South - slavery to them was just as wrong as stealing was to the widow. Twain quite clearly uses an ingenious combination of persuasive techniques, as well as underlying themes within the novel to influence the readers and to convey his thoughts on what is right and wrong in the world. Huck's character is the seemingly innocent base on which Twain puts forward his morals and ideals in a most interesting fashion. He uses mockery and humour to help get his point of view across to the reader and this adds to complexity and value of the novel. "Right is right, and wrong is wrong, and a body ain't got no business doing wrong when he ain't ignorant and knows better." - Tom Sawyer ...read more.