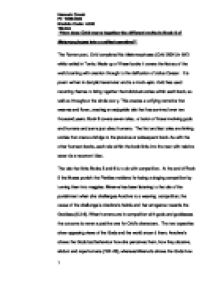 How does Ovid weave together the different myths in Book 6 of Metamorphoses into a unified narrative?

"How does Ovid weave together the different myths in Book 6 of Metamorphoses into a unified narrative?" The Roman poet, Ovid completed his Metamorphoses (Ovid 2004) in 8AD whilst exiled in Tomis. Made up of fifteen books it covers the history of the world starting with creation through to the deification of Julius Caesar. It is poem written in dactylic hexameter and is a mock-epic. Ovid has used recurring themes to bring together the individual stories within each book, as well as throughout the whole story. This creates a unifying narrative that weaves and flows, creating an enjoyable tale that has survived over two thousand years. Book 6 covers seven tales, a fusion of those involving gods and humans and some just about humans. The first and last tales are linking stories that create a bridge to the previous or subsequent book. As with the other fourteen books, each tale within the book links into the next with relative ease via a recurrent idea. The tale that links Books 5 and 6 is to do with competition. At the end of Book 5 the Muses punish the Pierides maidens for losing a singing competition by turning them into magpies. Minerva has been listening to the tale of the punishment when she challenges Arachne to a weaving competition; the cause of the challenge is Arachne's hubris and her arrogance towards the Goddess (6.3-6). When humans are in competition with gods and goddesses the outcome is never a positive one for Ovid's characters. ...read more.

After the deaths of Niobe's children, the residents of Thebes reflect upon the events and related it back to the tale of Latona's revenge on Lycian peasants after they refused to allow her to drink water from the pond. Even after she begs for them to take pity on her babes (6.356), they muddy the water and shout threats and abuse at her. Latona exacts her revenge by turning them into frogs who will then reside in the pool ever after. The element of competition focuses on who wins the rights to drink from the water pond. Rape is a subject matter that features throughout the whole of the Metamorphoses, in Book 6 it is Tereus' rape of Philomela that is written about. It is so striking in its depiction of violence and ultimate revenge that it contrasts well with the rapes that have been carried out by the Gods or with their permission in the first five books. The tale of Tereus, Procne and Philomela is the largest of the stories within Book 6 and is the only one involving only humans and for that reason stands out as important tale that the audience needs to take note of. Parallels can be directly drawn between this tale of human actions and the attempted seduction of Daphne by Apollo in Book 1. It juxtaposes lust with familial love. It contrasts desire with disgust and enchantment with enmity (Jacobsen 1984). ...read more.

The final story in Book 6 is again of rape and abduction, but because Boreas is divine, it is a gentler tale that results in marriage and the birth of children. It harps back to the tales we have in Book 1 of Zeus' escapades and ends the book on an acceptable note. In conclusion I feel that Ovid has drawn together an accumulation of myths and has woven together with a grace and beauty previously unknown. Each tale makes reference to its predecessor and supplies a link to its follower. Each book within the poem flows seamlessly from one to another with ideas and themes cropping up time and again. The overriding theme of change and metamorphosis keeps the reader guessing as to what is going to occur, who is going to change and how it will happen. Within each of the books there are themes and messages that are explored in different ways but each gives the audience the same advice. Within Book 6 the message that Ovid is giving is not to mess with the gods, they will always come off better. On a deeper level it could be a message to the readers not to confront the State and the Emperor as he himself did. Whatever Ovid's hidden or obvious goals in telling his stories, he has given the world a set of tales that has survived the centuries and has gone on to inspire many generations of artists. ...read more.