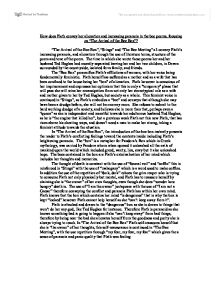 How does Plath convey her alienation and increasing paranoia in the bee poems, focusing on &quot;The Arrival of the Bee Box&quot;?

How does Plath convey her alienation and increasing paranoia in the bee poems, focusing on "The Arrival of the Bee Box"? "The Arrival of the Bee Box", "Stings" and "The Bee Meeting" all convey Plath's increasing paranoia, and alienation through the use of literature terms, structure of the poem and tone of the poem. The time in which she wrote these poems her and her husband Ted Hughes had recently separated leaving her and her two children, in Devon surrounded by the countryside, isolated form family, and friends. The "Bee Box" personifies Plath's afflictions of women, with her voice being fundamentally feministic. Plath herself has suffered as a mother and as a wife that has been confined to the house being her "box" of alienation. Plath however is conscious of her imprisonment and expresses her optimism that this is only a "temporary" phase that will pass she will wins her emancipation from not only her stereotypical role as a wife and mother given to her by Ted Hughes, but society as a whole. This feminist voice is continued in "Stings", as Plath's embodies a "bee" and conveys that although she may have been a drudge before, she will not be one any more. ...read more.

This can be viewed as Plath's inward reflection of herself and her mentality of paranoia, as on the surface she may seem to be at rest, with her mind being quiet and idle like a "coffin", however the turmoil beneath the surface forces her to quickly acknowledge otherwise "I have simply ordered a box of maniacs", which is the true state of her mind. However, "There are no windows" so Plath cannot see a way out of her "dark, dark" mind , thus making her increasing paranoid, as she cannot see the unknown. Plath's inability to expose the contents of the box/mind strengthens the perception of the box as a symbolic of her paranoid and alienated mind, as not even herself can sort her hostile and isolated mind . The use of the simile "strips of tinfoil winking" personifies the lifeless tinfoil and brings it to life; this illustrates how Plath feels about how the world is turning against her, giving the poem a paranoid tone to it. The plants then become human with the use of the simile "leaves like bored hearts"; this imagery reinforces the notion of Plath feeling increasingly isolated and paranoid as well as vulnerable. ...read more.

The use of "temporary" questions was the box ever truly going to control her mind. Therefore conveys Plath's increasing paranoia as she is constantly questioning herself as if she is being watched by everybody that is waiting for her to male a mistake. By this line being isolated it symbolises Plath's alienation for society as she is living in Devon surrounded by the countryside. "Stings" follow the strict regime of five lines per a stanza, not deviating via the last stanza like "The Arrival of the Bee Box" and "The Bee Meeting". Therefore showing her increasing paranoia as Plath is too afraid and too alienated to make a wrong step and deviate from what is safe, which is the routine. Also Plath feels so paranoid that if she makes a wrong move something bad will happen. To conclude "Stings", "The Arrival of the Bee Box" and "The Bee Meeting" all convey Plath's feelings of paranoia, and alienation whether these feelings were exaggerated or not through the use of literature techniques, structure/form of the poem and tone of the poem. These three bee poem all convey these feeling similarly and differently, maybe to contrast how bad these feelings were on the day she wrote these poems. ...read more.