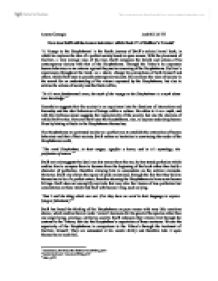 How does Swift satirise human behaviour within Book IV of Gulliver's Travels?

Lauren Carnegie Jack Hill LT111 How does Swift satirise human behaviour within Book IV of Gulliver's Travels? 'A Voyage to the Houyhnhnms' is the fourth journey of Swift's satirical travel book, in which he explores the idea of a perfect society based on pure reason. With the placement of Gulliver, a very average man of his time, Swift compares the beliefs and actions of his contemporary society with that of the Houyhnhnms. Through the Yahoo's he expresses human behaviour as an extreme against the passive reasoning of the Houyhnhnms. Gulliver's experiences throughout the book, as a whole, change his perceptions of both himself and others, which Swift uses to parody contemporary society. He examines the vices of society in the search for an understanding of the virtues expressed by the Houyhnhnms, but also to satirise the actions of society and the faults within, "In it's most fundamental sense, the myth of the voyage to the Houyhnhnms is a myth about true knowledge."1 Rosenheim suggests that this society is an experiment into the functions of interactions and hierarchy and the ideal behaviour of beings within a culture. He refers to it as a myth, and with this fictitious nature suggests the impracticality of the society, but also the idealism of which Swift writes. ...read more.

each pair must have both a colt and a filly and this is attained by swapping offspring. The Houyhnhnm's base their breeding on pure necessity, but also partake in the selective breeding of both sexes and colours, which runs parallel to the human breeding of horses. By systematising reproduction the Houyhnhnms are keeping the balance of society and the numbers of their population, a problem which humanity faces today. Gulliver makes no comment or criticism of the Houyhnhnms actions, but only praises them on education and reason. Despite these praises, we later discover their lack of knowledge outside their own country and lifestyle, "For, as he had no conception of any country besides his own, so he could not be expert in distinguishing remote objects at sea, as we who so much converse in that element."8 Here we see a critical conception of the Houyhnhnms and a self-involved, almost arrogant nature, again Swift hints at other human failings, but Gulliver simply dismisses them as quirks of this race. Swift still maintains an element of humanistic behaviour and knowledge within Gulliver throughout his visit to Houyhnhnmland, which enables the reader to constantly relate to his character, and therefore enhances the satirical aspect. ...read more.

He also uses their greed to satire the human selfishness and the structure of society with the objective of having "to have all to it self"15. By comparison to the Houyhnhnms Swift exemplifies the horror which is the Yahoo's behaviour, but, in turn, also epitomizes the actions of the Houyhnhnms, as Case affirms, "The Houyhnhnms and the Yahoos represent the extremes between which human behaviour may range."16 Throughout 'A Voyage to the Houyhnhnms', and the entirety of Gulliver's Travels Swift uses a range of comparisons to envelop the ideas of perfection and complete rationality. He brings into question the human pride and the fatality it has upon society. Swift uses the physically filth of the Yahoos to symbolise his views on the state of society and their actions to exemplify those of his contemporary society. Through Gulliver's Travels, Swift gives a commentary on the human condition between reason and rationality, and the selfishness of the Yahoos. Swift suggests many flaws with the human psyche and expresses his concern through the creation of other worlds and therefore other societies whose behaviour either contrasts or compares to that of our own. He makes a critical comment upon the reasoning of society and makes the reader question his own actions and those which surround him. ...read more.