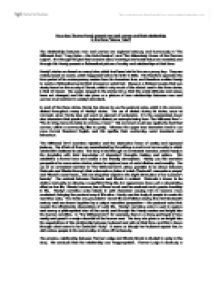 How does Thomas Hardy present men and women and their relationships in the three 'Wessex Tales'? The relationships between men and women are explored seriously and humorously in 'The Withered Arm', 'Tony Kytes - the Arch-Deceiver', and 'The Melancholy Hussar of the German Legion'. It is through the plot that concerns about marriage and social status are revealed, and through this Hardy presents a fictionalised picture of society and relationships at that time. Hardy's stories are based on many tales, which had been told to him as a young boy. They are mainly based on events, which happened before his birth in 1840. This therefore separates the time period of his contemporary readers from his characters lives, and therefore enables Hardy to create a fictionalised world that is based on social fact. Wessex is a fictional county that was closely based on the county of Dorset, which is why much of the dialect used in the three stories, is that of Dorset. The events relayed in the stories tell us that the social attitudes and values have not changed, and this also gives us a picture of how relationships between men and women must conform to society's standards. In each of the three stories, Hardy has chosen to use the pastoral voice, which is the common dialect throughout many of Hardy's stories. The use of dialect during his stories, occur at moments when Hardy does not want an element of pretension. It is the uneducated, lower class characters that speak with regional dialect, an example being from 'The Withered Arm' - "He do bring home his bride to-morrow, I hear." This comment could also signify the fact that women, within a community, like to gossip. Whereas the upper class characters tend to use more formal Standard English, and this signifies their conformity, social standards and behaviour. 'The Withered Arm' examines rejection and the destructive forces of vanity and repressed jealousy. ...read more.

She chooses to accept him as her husband; which is perhaps a pragmatic and sensible action in the long run. However, Tony's complete lack of respect for women is evident, although their behaviour does not seem to demand respect. It is apparent that they do not really care about his deceitfulness, as both Hannah and Unity both hope that Tony will ask for their hand in marriage again. His wish to pacify them at the end suggests his complete lack of understanding of the humiliation he has caused them to suffer. This could show that men do not really understand women, and vice versa, although this is still evident in the present day. It is also clear that much of the relationships needed parental approval, or that they needed to meet society's expectations. In this story, Thomas Hardy takes a wry look at the relationships between men and women. He uses first person narrative which allows the story to remain amusing, despite the humiliation at the end. The narrator refrains from criticising any of the characters' behaviour, instead recounting the tale as an example of the apparently incomprehensible way in which men and women behave towards each other. 'The Melancholy Hussar of the German Legion' is a short story of a girl named Phyllis Grove. She is fairly isolated form the world, and seems quiet and shy. Despite this, she becomes engaged to a respectable, higher-class, although still rather average, gentleman named Humphrey Gould. Shortly after becoming engaged, he leaves the area and goes to Bath, promising to return soon. However, whilst he is away, the 'celebrated' York Hussars and other regiments of the King's soldiers set up camp, close to Phyllis' home. As the story progresses she becomes friends with one Hussar in particular - Matthaus Tina. She refrains from allowing their friendship to become anything more, since she is still engaged. However, it becomes apparent that Humphrey does not consider himself engaged to Phyllis, and her relationship with Matthaus develops into romance. ...read more.

However, many lower class people believed that those who chose to live in isolation were witches, and we later learn that Rhoda has been "slyly called a witch", by the locals. The reader emphasises with Rhoda; this creates suspense and a curiosity as to how events will turn out. However, the upper class did not share the faith in witchcraft of the lower classes, and Hardy draws upon this to emphasise the vanity and desperation on Mrs. Lodge. As Gertrude says, "O, how could my people be so superstitious as to recommend a man of that sort?" when talking about Conjuror Trendle. She dismisses the idea until her desperation drives her to seek any cure possible and eventually comes to place her faith in witchcraft. She, too, now believes that her disfigurement is the cause of the unhappiness in her marriage. The magnitude of her vanity and her despair are emphasised by the gruesome suggested cure of Conjuror Trendle. Likewise, in 'Tony Kytes...' it is understood that social status and appropriate behaviour acquire more relevance in a small community in which it is difficult to be discreet. The disapproving voice of Tony's father reflects the importance of being seen to behave appropriately instead of "driving about the country with Jolliver's daughter making a scandal". This shows the hypocrisy also; as it presents to us the reader that it is more important in the working class system to conform to society's rules and regulations. The isolation of the community again plays its part in 'The Melancholy Hussar...' as marriage prospects are few for Phyllis. It is seen as a triumph for her when she becomes engaged to Humphrey Gould. However, when he leaves to visit the much larger community of Bath; very little is heard about him, and Phyllis eventually becomes attracted to the romantic figure of Matthaus. Her vulnerability is emphasised through her isolation, and once again social status and appropriate behaviour acquire more relevance in a small community, in which it is difficult to be discreet. ?? ?? ?? ?? ...read more.