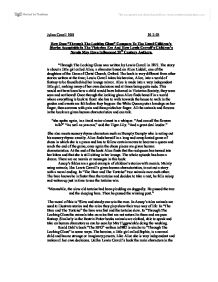 How Does &quot;Through The Looking Glass&quot; Compare To The Usual Children's Stories Acceptable in The Victorian Era And How Lewis Carroll's Children's Novels May Have Influenced 20th Century Authors.

Julian Coxell 10H 10-2-03 How Does "Through The Looking Glass" Compare To The Usual Children's Stories Acceptable in The Victorian Era And How Lewis Carroll's Children's Novels May Have Influenced 20th Century Authors. "Through The Looking Glass was written by Lewis Carroll in 1872. The story is about a little girl called Alice, a character based on Alice Liddell, one of the daughters of the Dean of Christ Church, Oxford. The book is very different from other stories written at the time; Lewis Carroll takes his heroine, Alice, into a world of fantasy to be found behind her lounge mirror. Alice is made into a very independent little girl, making many of her own decisions and at times being quite rude. This would not have been how a child would have behaved in Victorian Society; they were seen and not heard! Once through the looking glass Alice finds herself in a world where everything is back to front: she has to walk towards the house to walk in the garden and events are felt before they happen: the White Queen puts a bandage on her finger, then screams with pain and then pricks her finger. All the animals and flowers in the book are given human characteristics and can talk. "she spoke again, in a timid voice-almost in a whisper. "And can all the flowers talk?" "As well as you can," said the Tiger-Lily. "And a great deal louder." She also meets nursery rhyme characters such as Humpty Dumpty who is acting out his nursery rhyme exactly. ...read more.

J.K.Rowling also writes in a way that a child can understand, once again the book is very grammatical and clearly written. In some instances she uses made up words to name items, objects and animals that are imaginary and made up purely for the story. " 'This ball's called the Quaffle,' said Wood. The chasers throw the Quaffle to each other and try to get it through one of the hoops to score a goal.'" Roald Dahl writes so a child can easily understand what the story is about. In "The BFG" there are a lot of made up words used by the giants and the BFG, himself, talks very ungrammatically. "'Is you quite snugly there in your nightie?' he asked. "You isn't fridgy cold?'" In "Through The Looking Glass" all of the speech by the characters is grammatical and correct. However, in the Nonsense verse included in the book Lewis Carroll makes up words, especially in the "Jabberwocky" poem. "'Twas brillig, and the slithy toves Did gyre and gimble in the wabe." In Edwards Lear's "The Dong With The Luminous Nose" the only made up language are the names of places and characters. "For ever I'll seek by lake and shore Till I find my Jumbly girl once more." In "Through The Looking Glass" everything is back to front and nobody behaves or acts as they should and Alice is trying to make sense of it all and at times having to act in an adult way. ...read more.

The main similarity with "The BFG" and "Through The Looking Glass" is that both stories are centred on a child, in both cases a little girl who has been thrown into a strange situation. The children in both stories are outspoken and confident and take charge of the unusual situations they find themselves in. "'It's too ridiculous!' cried Alice, losing all her patience this time. 'You ought to have a wooden horse on wheels, that you ought'" "'I will be nothing but skin and groans.' 'You mean skin and bones,' Sophie said." The main differences between the stories are that there is no theme in "Through The Looking Glass" where as in all the other stories there are. Another difference is in the language, Lewis Carroll, Edward Lear and Aesop use very correct spellings with no shortened words or use of slang, Victorian authors in general produced works that could be used as an example of how things should be written: with correct spellings, grammar and punctuation. Even Alice, a child, pronounces all her words correctly. "'I didn't know I was to have a party at all,' said Alice: 'But if there is to be one, I think I ought to invited the guests.'" In "The BFG" and "Harry Potter and the Philosopher Stone" this is not always the case with things being written as a child would say it and using slang words that a child would use and which are now a part of everyday conversation. "'Sent owls off ter all yer parents' old school friends, askin' fer photos..knew yeh didn' have any.. ...read more.