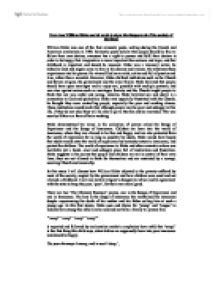 How does William Blake use his work to show his disapproval of the society of his time? William Blake was one of the first romantic poets, writing during the French and American revolutions in 1780. Romantic poets believe that people should be free to follow their own desires, everyone has a right to pursue and fulfil their desires in order to be happy, that imagination is more important than science and logic, and that childhood is important and should be innocent. Blake was a visionary writer, he talked to God and angels came to him in his dreams and visions. He translates these experiences into his poems. He viewed God as an artist, active and full of passion and love, rather than a scientist. However, Blake disliked institutions such as the Church and formal religion, the government and the royal family. Blake believed that people should have open marriages and to enjoy s*x, possibly with multiple partners, and was also against unions such as marriages. Society and the Church taught people to think that s*x was sinful and wrong, whereas Blake believed s*x and desire is a connection to God and spirituality. Blake was especially frustrated with the Church, he thought they were controlling people, especially the poor and working classes. These institutions would teach that although people may be poor and unhappy in this life, if they do not rebel they will be able to go to Heaven and be rewarded. This was seen by Blake as a form of brain washing, Blake demonstrated his views in his collection of poems called the Songs of Experience and the Songs of Innocence. Children are born into the world of innocence, where they are allowed to be free and happy, and are also protected from the world of experience for as long as possible by adults. Blake would have hoped that adults would enter the world of experience but someday return to innocence, and protect the children. ...read more.

'Into the dangerous world I leapt;' indicates the child at least has some energy and resilience, the semi colon used as a short pause after the outburst of energy and life from the infant. The infant struggles before giving up 'to sulk upon my mother's breast.' The full stop is the barrier, the infant is stuck in the world of experience and although 'striving against my swaddling-bands', the fight ends when he is no longer free and naked. 'The Echoing Green' shows the environment Blake would like for all children to grow up in, where they are protected for as long as possible by 'old folk', adults that have been able to return to innocence. One of the characters, Old John, has white hair symbolic of purity and innocence, and is laughing. The children are happy with words such as 'happy', 'merry bells' and 'cheerful' describing the green, which is also a symbolic colour of innocence. The language used is simple, showing how uncomplicated innocence can be. The title 'Echoing Green' suggests that the greenness surrounds the children, they are protected, and the 'echoing' also mimics the church bells ringing to welcome the Spring. The run around all day, playing sports until they are so weary they cannot be merry anymore. They return to their homes, which are described as nests, safe and protecting the children as the Green darkens. Throughout the poem, there are hints to suggest that as happy as this place is, it cannot last. The sun, present while the children are playing, begins to descend, symbolic of the end of innocence. The sun is like a character, and could also have religious meaning and suggest it is Christ watching the children play. Commas throughout the poem show that everything is happy, the children and adults here are able to pause and observe, as though the day could last forever and they have time to enjoy themselves. ...read more.

On what wings dare he aspire? What hand dare seize the fire?' challenge God. In this poem, Blake is marvelling what kind of God could make such a beautiful, deadly creature. Blake is showing that if God can make something as gentle as a lamb, and then makes a killing machine such as a Tiger, He must be dangerous. Blake is also portraying God as a workman or blacksmith, with the line 'In what furnace was thy brain?'. The God in this poem, despite not answering the questions, is clearly more of an artist. He is strong and powerful, the opposite to a lamb. The use of exclamation marks throughout indicates the awe and wonder felt by the person asking the questions. The pace is fast, and is almost predatory, similar to the movement of a tiger. The pace also reflects the thoughts processes of the person asking the questions, there is a sense of excitement and the images created are vivid. Run on lines are used in the first stanza, and also in the last as the first stanza is repeated at the end of the poem to reinforce the magnificence of such a beautiful creature and its creator. 'Tiger! Tiger! Burning bright In the forests of the night, What immortal hand or eye Dare frame thy fearful symmetry?' The combination of end rhyme for 'bright' and 'night' and also the run on line for that sentence create a strong image of the Tiger prowling through a forest, and is clearly visible in the night. The second line rhymes 'eye' and 'symmetry' to suggest that God must be physically perfect and immortal to create such a beautiful, strong creature. In conclusion, Blake has used his collection of poems to demonstrate many of his views on the society of his era, including his disapproval of institutions such as the church, the government and royal family, his ideas on marriage and sexuality, the neglect of the poor, and also the way the church brainwash people to control them so that they do not question anything. ...read more.