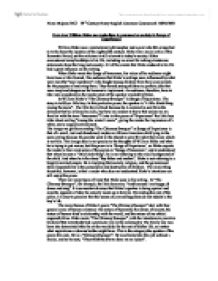 How does William Blake use symbolism to comment on society in Songs of Experience?

How does William Blake use symbolism to comment on society in Songs of Experience? William Blake was a revolutionary philosopher and a poet who felt compelled to write about the injustice of the eighteenth century. Blake was a social critic of the Romantic Period, yet his criticism is still relevant to today's society. Blake encountered many hardships in his life, including an arrest for making slanderous statements about the king and country. All of the events that Blake endured in his life had a great influence on his writing. When Blake wrote the Songs of Innocence, his vision of his audience might have been a little blurred. The audience that Blake's writings were influenced by what were wealthy "soul murderers", who bought young children from their poor parents for the purpose of enslaving them. They forced young children to perform jobs that were inapt and dangerous for humans to implement. An audience, therefore, have to take into consideration the mental state of the speaker created by Blake. In William Blake's "The Chimney Sweeper" in Songs of Experience. The story is told by a little boy. In this particular poem, the speaker is "a little black thing among the snow". The little boy is black because he is covered in soot from the chimney that he is forced to clean, but how are readers to know this unless we are familiar with the term "Innocence"? Later in this poem of "Experience" the little boy talks about smiling "among the winter's snow", giving the reader the impression of a white, snow-capped environment. The image we get from reading "The Chimney Sweeper" in Songs of Experience is that of a small, lost and abandoned, maybe an African-American child lying in the snow crying because his parents went to the church to pray for what they want, which is not him. This image does is not precise to the thoughts of William Blake and what he is trying to put across, but this poem is in 'Songs ...read more.

He demonstrates to the world that as a writer he personally understands some of the faces of the God he believes in. In these faces of God, Blake made some fascinating revelations on what society was becoming to be. He related these revelations by subtly making comments, and remarking on the faults of society in most of his poems, mainly from 'Songs of Experience.' The foundation for a lot of Blake's poems was society and the things he found appalling in it. For example, in his reflection of "London," William Blake laments the poverty faced by the lower class of modern, industrialised London, and he can find no note of consolation or hope for their future. Blake uses this theme to dramatically depict the conditions in which the oppressed lower class is forced to live; he develops the theme through the use of sounds, symbolism, and an ironic twist of words in the last line that expresses Blake's ultimate belief in the hopelessness of the situation. The poem is dominated by a rigid meter that mirrors the rigidity and the helpless situation of the lives of the poor and the oppressive class system. The first stanza begins with Blake describing someone who sounds most likely to be himself walking through the "charter'd" streets of the city near the "charter'd" Thames. Every aspect of the city has been sanctioned and organized by the ruling class for example, seeing expressions of weakness and woe on the faces of all the people he meets. The streets and the river make up a network that has been laid out and chartered by the wealthy class to control the poor. The poet walks among the poor, participating in the drudgery of their daily lives; he feels their misery as they endlessly struggle to survive as pawns of the class system of the harsh society. In the second stanza Blake describes how in every voice of every person he perceives their "mind-forg'd manacles." ...read more.

("The Tyger," for example, attempts to account for real, negative forces in the universe, which innocence such as in 'The Lamb' fails to confront). These latter poems treat s****l morality in terms of the repressive effects of jealousy, shame, and secrecy, all of which corrupt the ingenuousness of innocent love. With regard to religion, they are less concerned with the character of individual faith than with the institution of the Church, its role in politics, and its effects on society and the individual mind. Experience thus adds a layer to innocence that darkens its hopeful vision while compensating for some of its ignorant blindness. The style of the Songs of Innocence and Experience is simple and direct, but the language and the rhythms are painstakingly crafted, and the ideas they explore are often deceptively complex. Many of the poems are narrative in style; others, like "The Sick Rose" and "The Divine Image," make their arguments through various types of symbolism or by means of abstract concepts. Some of Blake's favourite rhetorical techniques are personification and the reworking of Biblical symbolism and language. Blake frequently employs the familiar meters of ballads, nursery rhymes, and hymns, applying them to his own, often unorthodox conceptions. This combination of tradition and the unfamiliar, with Blake's perpetual interest in reconsidering and reframing the assumptions of human thought and social behaviour depict that Blake's philosophical thoughts have always questioned the ways of society of his time and the future, in many ways his thoughts extracted from his work were indeed correct and by using symbolism in words, metaphors, sounds, enjambments and narrators plus several other ways has commented on society through his personal point of view, he used religion, people's classes, people's occupations, other living beings and indications of emotions to get his ideas across, whether in agreement or not. Most of William Blake's poems especially in 'Songs of Experience' are disagreeing with the ways of society and the rules. Fiona Malpass 10C1 19th Century Poetry English Literature Coursework 08/05/2007 ...read more.