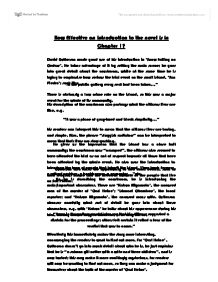 How Effective an Introduction to the novel is in Chapter 1?

How Effective an Introduction to the novel is in Chapter 1? David Gutterson made good use of his introduction in 'Snow falling on Cedars'. He takes advantage of it by setting the main scene; he goes into great detail about the courtroom, while at the same time he is trying to emphasise how serious the trial event on the small island, 'San Piedro'; such like "In the public gallery every seat had been taken..." There is obviously a low crime rate on the island, so this was a major event for the whole of its community. His description of the courtroom also portrays what the citizens lives are like, e.g. "It was a place of gray-hued and bleak simplicity..." his readers can interpret this to mean that the citizens lives are boring, and simple. ...read more.

Gutterson chooses carefully what sort of detail he goes into about these characters, e.g. with 'Kabuo' he talks about his appearance during his trial, hinting that he may be innocent, or he may not be, "Some in the gallery would later say that his stillness suggested a disdain for the proceedings; others felt certain it veiled a fear of the verdict that was to come." Effectively this immediately makes the story more interesting, encouraging the readers to want to find out more, For 'Carl Heine', Gutterson doesn't go into much detail about who he is, he just explains that he is "a salmon gill-netter with a wife and three children", and is now buried; this may make it more excitingly mysterious, for readers will now be wanting to find out more, so they can make a judgment for themselves about the truth of the murder of 'Carl Heine'. ...read more.

There are no extra shops/buildings in the town such as more than one estate agents etc. They are all what the citizens need rather than them being there for the sake of the town having a variety. There is also a sense of the island being very picturesque, "San Piedro had too a brand of verdant beauty that inclined its residents toward the poetical" He goes into more detail of what the island looks like; this makes the island seem interesting for the readers to read about. The introduction is very effective to the novel, if David Gutterson didn't make good use of Chapter one,; to introduce the main/important characters, set the main scene, and describe the environment/island, readers wouldn't have been given the opportunity to indulge themselves into the story, it would be likely that the readers wouldn't bother to carry on readeing the whole book. ...read more.