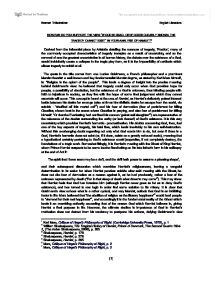 How far do you support the view if god is dead, or if god is clearly known, the tragedy cannot exist in your analysis of Hamlet?

HOW FAR DO YOU SUPPORT THE VIEW 'IF GOD IS DEAD, OR IF GOD IS CLEARLY KNOWN, THE TRAGEDY CANNOT EXIST' IN YOUR ANALYSIS OF HAMLET? Derived from the influential piece by Aristotle detailing the nuances of tragedy, 'Poetics', many of the commonly accepted characteristics of tragedy transpire as a result of uncertainty, and so the removal of one the greatest uncertainties in all human history, the debate over the existence of a God, would indubitably cause a collapse in the tragic play form, as it is the impossibility of certitude which allows tragedy to unfold at all. The quote in the title comes from one Lucien Goldmann, a French philosopher and a prominent Marxist theorist: a well-known and key fundamentalist Marxist dogma, as stated by Karl Marx himself, is: "Religion is the opium of the people"1. This lends a degree of insight into the precise meaning behind Goldmann's view: he believed that tragedy could only occur when God provides hope for people, a possibility of absolution, but the existence of a God is unknown, thus blinding people with faith to injustices in society, as they live with the hope of some final judgement which they cannot ascertain will occur. This concept is found at the crux of Hamlet, as Hamlet's delicately poised internal battle between his desire for revenge (also at times his nihilistic desire for escape from the world, via suicide - "shuffled off this mortal coil"2) ...read more.

Hamlet - the original play maintains pathos in that Hamlet is only moved to fear the unknown after fearing God's wrath, and his desperation for absolution is all too plain to see, as it has built up throughout the play. Even if Hamlet lived on past this stage to receive his orders from the Ghost, the confirmation that God did not exist would allow him to exact revenge as he pleased, again negating pathos, as the audience (more an Elizabethan audience than a modern audience, but modern audiences also) now view him simply as one who has avenged his father through a continuation of violence, rather than the trapped figure of despair and uncertainty he actually is. Whatever the case in this Godless scenario, the world would become a melting pot for the material whims of man, and true tragedy would not exist, as many of its key components become lost and there would be no empathy from the audience, and the purpose of tragedy for many is to have an effect on the audience: the reality of circumstance and emotion which links the audience to the play would be lost. In the situation wherein God is dead, then, tragedy of an Aristotelian nature categorically cannot exist, whether in terms of strict form or in terms of audience reaction to the situation presented. Conversely, suppose that God is indeed clearly known: under such circumstances, Hamlet is highly likely to let God judge the fate ...read more.

then question the morality of God, pondering whether God is necessarily omnibenevolent - there would still be scope for uncertainty, even with the verified existence of God. In Hamlet, uncertainty is the key to tragedy: it is uncertainty which lends Hamlet his fatal flaw, which results in the mistakes that lead him to his ineluctable death and the collapse of the Danish royal family. Also, ambiguity concerning the nature of the Ghost and its importance relative to God (should God exist) could also inspire procrastination within Hamlet: should he obey his father, his creator, or the ultimate creator? Furthermore, as mentioned above, the apparent declining importance of God in Hamlet's motivation and reasoning as the play progresses is indicative of the fact that tragedy can still exist (and not be hugely impacted at that) without God as a factor. It is therefore possible to achieve aspects of tragedy while categorically affirming or denying the existence of a God. Overall, though, the general ambiguity regarding God is vital in preserving true tragedy. Goldmann's quote may have been borne mainly out of his Marxist tendencies, but its message holds true for Hamlet. And while it has been established that certain facets of tragedy (pathos and hamartia) can remain in the face of hypothetical absolute truth, some components of tragedy are usually lost when God is dead or clearly known, as hope and faith, according to Marxism at least, fuels acceptance of social injustice and perpetuates suffering. ...read more.