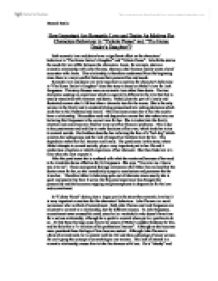 How Important Are Romantic Love and Desire As Motives For Characters Behaviour in "Tickets Please" and "The Horse Dealer's Daughter"? Both romantic love and desire have a significant effect on the characters' behaviour in "The Horse Dealer's Daughter" and "Tickets Please". In both the stories the needs for love differ between the characters. Annie, for example, desires a romantic relationship with John Thomas, whereas John Thomas merely wants a brief encounter with Annie. This relationship is therefore condemned from the beginning since there is a major conflict between their personalities and needs. Romantic love and desire are very important as motives for character's behaviour in "The Horse Dealer's Daughter" since the story is based on Mabel's love for Jack Fergusson. This story focuses more on romantic love rather then desire. The two characters undergo an experience which is especially different to the love that that is usually associated with romance and desire. Mabel plays the part of a lonely and frustrated woman who's life has taken a dramatic turn for the worse. ...read more.

In "Tickets Please" desire plays a larger part in the story than romantic love but it is very important as motives for the characters' behaviour. John Thomas is a serial womaniser who is afraid of commitment. Both John Thomas and Jack Fergusson are reluctant to commit to a relationship, but for different reasons. To Jack Fergusson, commitment never crossed his mind, since he is a workaholic who doesn't have time for a serious relationship, although he is quick to commit when put in a position to do so. At first these feelings cause him to be unsure of Mabel's sudden fondness for him, and he feels this is "a violation of his professional honour". Although as she becomes more persistent these feelings of love become mutual. Although John Thomas is afraid of commitment, he is content with his life and takes advantage of many women. He can't grasp the concept of committing to one woman. ...read more.

These feelings of guilt lead her to a sudden outburst at the end of the story, "Shut up, for God's sake!" cried Annie fiercely, as if in torture.". This shows that she regrets the pain that she has just inflicted on John and that she is having conflicting emotions. These conflicting emotions were building up in her head and were in some ways released with her sudden outburst. In some way she feels that he deserved his punishment but she also feels that it was too harsh. She feels guilty and responsible. There is an air of finality here, since she knows that what ever chance that she did have with him is now ruined. Neither John nor Annie gains from this experience since both of them remain single and separate and they are left feeling discontented. Therefore I can conclude that romantic love and desire have a large effect on the motives for the character's behaviour in "The Horse Dealer's Daughter" and "Tickets Please". Hannah Butlin ...read more.