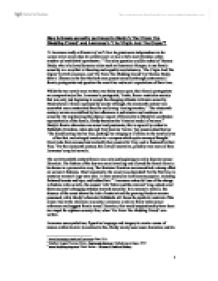 How is female sexuality portrayed in Hardy's 'Far From The Madding Crowd' and Lawrence's 'The Virgin And The Gypsy'?

How is female sexuality portrayed in Hardy's 'Far From The Madding Crowd' and Lawrence's 'The Virgin And The Gypsy'? 'Is Lawrence really a liberator of sex? Does he grant more independence to the women in his novels than his predecessors or just a little more freedom within confines of established expectations.'1 The same question could be asked of Thomas Hardy, who is believed by some critics such as Rosemarie Morgan, to use female sexuality in a way that is liberating and arguably revolutionary. 'The Virgin And The Gypsy' by D.H.Lawrence, and 'Far From The Madding Crowd' by Thomas Hardy, show a likeness in the fact that both men present sexuality through controversial female protagonists and question the moralities and social expectations of their time. Whilst the two novels were written over thirty years apart, their female protagonists are comparatively alike. Lawrence's protagonist, Yvette, faces a restrictive society that was only just beginning to accept the changing attitudes in female sexuality. Hardy shows a female repressed by society although, the nineteenth century was somewhat more constrained than the mellowing 'roaring twenties.' 'The nineteenth century woman was defined by her adherence to submission and resistance to sexuality. By emphasizing the physical aspect of femininity in [Hardy's] unorthodox representation of the female, Hardy threatens the Victorian model of women.'2 Hardy's female characters are sexual and passionate; this is especially evident in Bathsheba Everdene, when she and Troy become 'lovers,' her passion described as: 'The blood beating into her face, [setting] her stinging as if aflame to the very hollows of her feet, and enlarged emotion to a compass which quite swamped thought.' ...read more.

Bathsheba's youth and virginity is also referred to but Hardy appears to use sex (within her marriage) as a negative force upon women, a great contrast to Lawrence's overly positive view of intercourse. All of the other female characters in 'The Virgin And The Gypsy', with the exception of Yvette and the gypsy woman represent the 'civilised world' where social norms are adhered to and sexual desire is repressed. Aunt Cissy in particular begins to represent 'barrenness and the contradiction of this negative form of female power.'9 She is a 'destroyed woman' because of the absence of desire and her lack of sexuality. In this novella, sex is a symbol of life and vitality, without which, women become powerless and 'destroyed.' Hardy's lesser female characters seem to have the sole function of representing the social norms of 'females'; this then acts as a great contrast to the 'self-reliant' Bathsheba. What both Lawrence and Hardy seem preoccupied with is the ideal of feminine youth and beauty. This, and the male attention it draws seem to be why females have power and are indisputably superior to the male characters. Their physical appearance either implied or explicit, gives them power over men. Sex and female sexuality is a factor in these novels, and in both cases it appears to represent freedom and liberation. What is different however is that sexuality and attraction strengthens Bathsheba but actual intercourse represses her, while the opposite is true for Yvette; the loss of her virginity results in the freedom from society's restraints, and her own prejudices. ...read more.

This description has different implications, on one hand it refers to the tamed and owned aspect of the rector, while it also implies the 'mixed nature of the rector.'13 He is both a vicar, a supposed 'believer' as well as 'frantically afraid', while he preaches about faith, Lawrence makes it evident that he has no faith. Therefore the noun 'mongrel' suggests that the rector's beliefs and all religion is a fa�ade, enforcing his opinion that only sexuality is pure and true. Lawrence uses the fact that the gypsy is 'stronger than she' is and he is in no way dependant upon her to show unadulterated sexual desire. Lawrence's description of the gypsy is ironic as this symbol of desire, is described as having a 'pure nose' or a 'pure line.' The adjective 'pure' has connotations with religion, particularly with baptism, the cleansing to become pure and be accepted. In some ways, the gypsy confirms Yvette and her sexuality in a similar way to these religious traditions. Female liberation is of great importance in 'The Virgin And The Gypsy'. Lawrence employs symbolism to demonstrate changing views towards women and their sexuality. Yvette's virginity is lost along with her innocence through sexual intercourse with a gypsy. With this act 'Lawrence dispels a dangerous myth: that women do not enjoy having sex.'14 What I feel is most significant about this ending is the fact that they come together out of necessity for life and not through desire. I suspect that Lawrence was trying to convey the message that sexuality is instinctive, and that Yvette is liberated by the realisation that it was her father's (and society's) dirty moralities that were shameful not her desire. ...read more.