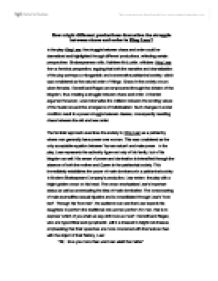 How might different productions dramatise the struggle between chaos and order in King Lear?

How might different productions dramatise the struggle between chaos and order in King Lear? In the play King Lear, the struggle between chaos and order could be dramatised and highlighted through different productions, reflecting certain perspectives. Shakespearean critic, Kathleen McLuskie, criticises King Lear from a feminist perspective, arguing that both the narrative and dramatisation of the play portrays a misogynistic and conservative patriarchal society, which was considered as the natural order of things. Chaos in the society occurs when females, Gonerill and Regan are empowered through the division of the kingdom, thus creating a struggle between chaos and order. A Marxist argument however, would dramatise the collision between the eroding values of the feudal era and the emergence of individualism. Such changes in social condition result in a power struggle between classes, consequently resulting chaos between the old and new order. The feminist approach examines the society in King Lear as a patriarchy where men generally have power over women. This was considered as the only acceptable equation between 'human nature' and male power. In the play, Lear represents the authority figure not only of his family, but of his kingdom as well. His sense of power and domination is intensified through the absence of both the mother and Queen in the patriarchal society. ...read more.

This struggle between chaos and order is only restored when the patriarchal society is in control again. Towards the end of the play, Cordelia reunites with Lear. The scene focuses on Cordelia's angelic nature in this reunion when she hopes "restoration hang thy medicine on my lips, and let this kiss repair those violent harms that my two sisters have in thy reverence made". The purpose of this reunion is to demonstrate the restoration of the father and daughter relationship. However in Modern Shakespeare's production, Cordelia kneels before Lear while he sits on his throne. This production depicts a feminist perspective of the play, where Cordelia's reconciliation with his father works less as recovery of their broken relationship, but symbolises the redemption of nature from chaos. The patriarchy is restored when females lose their power. This idea is further supported by the death of Gonerill and Regan. The death of the fundamental causes of chaos restores harmony and the natural law. Following their tragic death, Albany takes control of the situation, which is also the moment when males are in the position of power again. His rational manner in sorting out the mess is contrasted against females' irrationality who have poisoned and killed each other. This once again condemns females' ability in taking the position of power and decision-making. ...read more.

His struggle to seek order within this chaos brought him to realisation when he comes to identify with the poor. Lear's incapability to deal with the cruel treatment from the new order brings him to the level of the poor and working class. He recognises the helplessness of the poor compared to the power of the rich property owners. "Take physic, pomp,/ Expose thyself to feel what wretches feel, / That though mayst shake the superflux to them/ And show the heavens more just" His identification with the poor makes him question the validity of property and power. This allows him to redeem himself from his struggle of retaining power and to restore order within himself. Shakespeare reflects this idea using stage directions such as "storm still" to show Lear's restoration of order. The struggle between chaos and order is dramatised through different productions of the play. Both feminist and Marxist productions of the play considered chaos as a result of the reversed of natural order. Feminist approach criticises the patriarchal society which regards the female as the reason for all the chaotic events. Order is restored when the females who trigger the chaos lose their power. Marxist production however sees power struggle as the causes for chaos and conflict. The hierarchical system is re-established when the characters such as Lear unleash their desire for power, ceasing a struggle between chaos and order. ...read more.