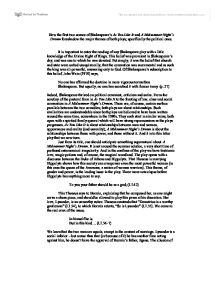 How the first two scenes of Shakespeare's As You Like It and A Midsummer Night's Dream foreshadow the major themes of both plays; specifically the political ones. It is important to enter the reading of any Shakespeare play with a little knowledge of the Divine Right of Kings. This belief was prevalent in Shakespeare's day, and was one to which he was devoted. Put simply, it was the belief that church and state were united unequivocally, that the coronation was sacramental and as such the king was all-powerful, answering only to God. Of Shakespeare's subscription to this belief, John Wain (1970) says, No one has affirmed the doctrine in more vigorous terms than Shakespeare. But equally, no one has scorched it with fiercer irony. (p. 27) Indeed, Shakespeare thrived on political comment, criticism and satire. From the scrutiny of the pastoral form in As You Like It to the fronting of law, class and social convention in A Midsummer Night's Dream. There are, of course, certain surface parallels between the two comedies; both plays are about relationships. Such similarities are understandable since both plays are believed to have been written around the same time, somewhere in the 1590s. They each start in similar veins; both open with a spirited family quarrel which will have strong repercussions as the plays progresses. ...read more.

This, to a small extent, we do see at the play's close; after Shakespeare has scrutinised and flouted the pastoral arena in which most of the play takes place. Penny Gay calls As You Like It a "damning indictment of a power-hungry urban society" (1994, p.48). Many of the same socio-political themes in A Midsummer's avail themselves of As You Like It. In this latter play, to which we now turn, we see a similar patriarchal political structure. But when we join the play, Duke Frederick has rebelled against his elder brother, the Duke Senior, defeated him and usurped his position. This power-hungry political structure has been assaulted. As Duthie (1966) says, "The court milieu at the beginning of As You Like It...is one in which disorder flourishes" (p.63). This is an "envious" court (II, 1, 4), one where people cannot speak their minds; "The more pity that fools may not speak wisely what wise men do foolishly" (I.2.81-2), says Touchstone, who may only speak his mind on account of his position as the court's fool. Oliver is desperately jealous of the affection his brother Orlando receives from Oliver's "own people" (I.1.158). Of great significance to the whole play is Jacques's speech in II.7l; All the world's a stage, and all the men and women merely players; They have their exits and their entrances, and one man in his time plays many parts. ...read more.

Highly suspicious is Celia's marriage to Oliver. It is absurd that the two cousins, so close and alike all through the play, could at the end marry such different people. Hussy (1992) says it is ...perhaps a contrived solution for two characters who would otherwise have been left over (Hussey, p.213) By far the most intriguing thing is Rosalind's epilogue. Shakespeare has her challenging all the conventions of the Elizabethan theatre, essentially saying that if a man can have the first word, why not a woman the last word? From the very beginning Rosalind has served a vital role most succinctly defined by Penny Gay; a role that has seen her dressing first as a man, and then as a man dressed as a woman. Gender ceased to be a significant issue, it was merely a role to be assumed with values to have imposed. As you Like It affects, through Rosalind's behaviour, the most thorough deconstruction of patriarchy and its gender roles in the Shakespearean canon" (Gay, 1994, p.49) We have looked at the political themes of both the comedies, and we come now to the entwining of the two. Both plays are about relationships. A Midsummer Night's Dream is about the relationship between men and women, since men have power and women do not. ...read more.