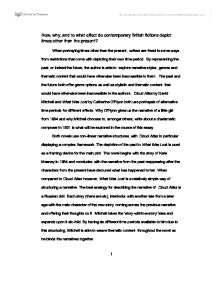 How, why, and to what effect do contemporary British fictions depict times other than the present?

How, why, and to what effect do contemporary British fictions depict times other than the present? When portraying times other than the present, writers are freed in some ways from restrictions that come with depicting their own time period. By representing the past, or indeed the future, the author is able to explore narrative styles, genres and thematic content that would have otherwise been inaccessible to them. The past and the future both offer genre options as well as stylistic and thematic content that would have otherwise been inaccessible to the authors. Cloud Atlas by David Mitchell and What Was Lost by Catherine O'Flynn both use portrayals of alternative time periods for different effects. Why O'Flynn gives us the narrative of a little girl from 1984 and why Mitchell chooses to, amongst others, write about a charismatic composer in 1931 is what will be explored in the course of this essay. Both novels use non-linear narrative structures, with Cloud Atlas in particular displaying a complex framework. The depiction of the past in What Was Lost is used as a framing device for the main plot. The novel begins with the story of Kate Meaney in 1984 and concludes with the narrative from the past reappearing after the characters from the present have deduced what has happened to her. When compared to Cloud Atlas however, What Was Lost is a relatively simple way of structuring a narrative. ...read more.

The conditions of a 'dystopia' are easily fulfilled though, by both Green Oaks and Aurora House in The Ghastly Ordeal of Timothy Cavendish. M. Keith Booker puts forward that dystopian literature: ...constitutes a critique of existing social conditions or political systems, either through the critical examination of the utopian premises upon which those conditions are based or through the imaginative extension of those conditions and systems into different contexts that more clearly reveal their flaws and contradictions.4 Under these conditions therefore that literature that contains 'oppositional and critical energy or spirit' fits into the dystopian idea, the premises of a retirement home and a shopping centre can be examined along with the more 'conventional' futuristic example. Where dystopian theory relates to reasons for depicting times other than the present in What Was Lost is in O'Flynn's subversion of the 'typical' scenario. As mentioned earlier dystopian literature often (but not always) involves looking ahead to what might occur in the future. By beginning the narrative in 1984 O'Flynn is able to create a 'dystopian future' in the present. Green Oaks is still present in Kate's time; however it is not as the overwhelming, spirit-crushing presence which dominates the modern day narrative. By arranging the temporal structure in this manner O'Flynn is able to infer that looking to the future is not always necessary as there are examples of dystopias to be found in the present day. ...read more.

Timothy Cavendish escapes from Aurora house, Luisa Rey brings down the corrupt Seaboard Corporation and Adam Ewing devotes his life to the abolitionist cause after his life is saved by Autua. Tragically, Kate cannot be saved in What Was Lost as the consumerist, surveillance crazy society had already accounted for her. However, her death is shown to be the inspiration for Kurt and Lisa to escape Green Oaks. Also, even in her lifetime Kate is shown to have made someone's life better. Theresa is afforded the focus of the final narrative and the image of her: content, driving off into the sunset with 'the light all around me' would have never been possible had Kate's selfless gesture in writing her name on the school entrance exam never happened. Overall, there have been many motives for depicting times other than the present day discussed here. However, it appears that the overriding reason for a temporal shift is to show that nothing changes at all. Characters in the past, and indeed the future, are shown to be experiencing the same concerns as their present day counterparts. Thematically, there are instances in both novels of characters from different times tackling remarkably similar issues. Aside from the literary function of having multiple timelines and the opportunities it presents as a result; the reason that these authors choose to depict times other than the present is to show that they do not necessarily need to look to the past or the future as the cyclical nature of history means that the same problems will continue to arise. ...read more.