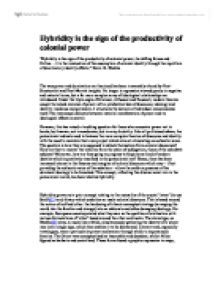 Hybridity is the sign of the productivity of colonial power

Hybridity is the sign of the productivity of colonial power "Hybridity is the sign of the productivity of colonial power, its shifting forces and fixities....it is the revaluation of the assumption of colonial identity through the repetition of discrimatory identity effects." Homi. K. Bhabha The way power and domination are theorized has been irrevocably altered by Post-Structuralist and Post-Marxist insights. No longer is repression viewed purely in negative and material terms, but a far more complex array of ideological relationships are introduced. Under the triple-aegis of Gramsci, Althusser and Foucault, modern theories couple the naked exercise of power with a productive idea of discourse, ideology and identity: insidious and pervasive; it structures the domain of individual consciousness itself. The intercasual dialectic between material manifestation of power and its ideological effects is central. However, this has raised a troubling question for those who encounter power not in books, but barrios, not in academies, but in army brutality. Like all politicised others, the postcolonial radicals need to balance the more complex theories of discourse and identity with the need to maintain their own project which aims at articulating an authentic voice. The question is how they are supposed to detach themselves from colonial discourses? How are they to recover the histories from the years of subjugation, those of the subaltern subjects? Moreover, how are they going to progress to forge some kind of modern identity which is positively inscribed in the postcolonial era? Hence, there has been increased interest in the fissures and margins of colonial discourse which may - if not providing the authentic voice of the subaltern - allow the uniform presence of the dominant ideology to be breached. ...read more.

Literature tends to mediate - whether consciously or unconsciously - between modes of value. Although a lot of colonial literature is obviously locked into the discourse of the coloniser, we can see the erosion of the latent binaries in work such as Heart of Darkness which uses an admittedly stereotypical image of the 'other' to diagnose a malaise at the root of 'self.' Many theorists have attacked the relentless emphasis on discourse. They argue its shifts the emphasis away from the material conditions of exploitation, and gives the impression of some kind of symmetrical contact. Of course, contact was profoundly asymmetrical, and, in the words of C�saire's rhetorical question: "has colonialism really placed civilisations in contact?...no human contact, but relations of domination of submission."[3] Others say that hybridity is not a sign of subversive liminality but rather a powerful violation of a colonial subject's authentic identity. Nevertheless, in the hands of Bhaba, hybridity is also seen as having a disruptive effect; opening fissures and fractures within a dominant ideology. He identifies the productivity of discourse: its need to embody itself not only in stereotypes and examples of pr�l�vement (naked exercise of repressive power) but in a complex set of discourses, institutions and relations. As such, it evolves along with the colonial situation; responding to it. Indeed, what he calls the 'play' in colonial discourse is a condition for its very existence: its ability to contextualise and recontextualise itself. Yet he contrasts this diachronic aspect of colonialism - "historically and discursively determined"[4] - with the compulsive need to crystallise colonial relations into stasis and fixity: primarily to preserve the master/slave opposition. ...read more.

Also relevant is the fact that nationalist movements often assimilate and reproduce elements of colonial discourse themselves, vis-�-vis class and gender. Hence it becomes clear that any notion of resistance which is autonomous of colonialist discourse is oversimplistic. No nationalist movement can simply 'erase' the centuries of colonial history which have helped the evolution of their culture, yet to give up on the project of recovering some pre-colonial 'authentic' identity is a depressing prospect. Yet if the postcolonial radical is truly interested in the voice of the 'subaltern' during the era of colonisation itself, then he/she could do little better than to look to the liminalities and hybridities of colonial discourse. There they may be able to find the repressed histories and identities they seek. Literature - as an ambiguous terrain of representation, fictions and alternative worlds, culturally-specific in its use of language and a traditional mediator of conflicts in discourse and value - can become a rich lode of these things within ideology. By analysing a colonial work, a critic can begin to unravel the contradictions, instabilities and interpenentrations in the ideology of the coloniser. By writing a postcolonial work, a writer can resist or question colonial discourse right at its cultural heart. It is little surprise that hybridity in literature has become symbolic not only of the complexity of colonial experience, but also the possibilities of transgression and disruption. [1] Edward Said, from Orientalism (1978), collected in Literature in the Modern World, ed.Dennis Walder (Oxford, 1990) [2] Homi Bhaba, The Other Question (1983), collected in Mogia [3] Aim� C�saire, from Discourse on Colonialism (1950) cited in Ania Loomba, Colonialism/Postcolonialism (London, 1998) p.69 [4] Homi Bhaba, The Other Question, collected in Contemporary Postcolonial Theory: A Reader, ed.Padmini Mongia (London, 1996) p.42 ...read more.