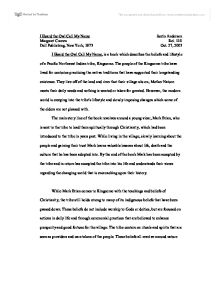 I Heard the Owl Call My Name - summary.

I Heard the Owl Call My Name Justin Anderson Margaret Craven Rel. 110 Dell Publishing, New York, 1973 Oct. 27, 2003 I Heard the Owl Call My Name, is a book which describes the beliefs and lifestyle of a Pacific Northwest Indian tribe, Kingcome. The people of the Kingcome tribe have lived for centuries practicing the native traditions that have supported their longstanding existence. They live off of the land and river that their village sits on; Mother Nature meets their daily needs and nothing is wasted or taken for granted. However, the modern world is creeping into the tribe's lifestyle and slowly imposing changes which some of the elders are not pleased with. The main story line of the book revolves around a young vicar, Mark Brian, who is sent to the tribe to lead them spiritually through Christianity, which had been introduced to the tribe in years past. While living in the village, slowly learning about the people and gaining their trust Mark learns valuable lessons about life, death and the culture that he has been adopted into. By the end of the book Mark has been accepted by the tribe and in return has accepted the tribe into his life and understands their views regarding the changing world that is encroaching upon their history. ...read more.

Inanimate parts of nature are also worshiped, as in the case of a nearby mountain to the village that holds significant meaning. In a story of a battle long ago it was said of the mountain, "...the spirit that lives in Whoop-Szu, the Noisy Mountain, that is across the river and towers over the village, heard the enemy coming and sent down a slide and buried it." (p.18) Nature was not only was seen as a provider for the people of Kingcome, but it played important roles in their views of death and the cycle of the human spirit after death. Mark and a younger woman in the tribe explained death to a child, "It is not sad. It is natural. When I was a child and a sea-hunter died, we believed he went to the land of the killer whale, and a land-hunter to the home the wolves, and a slave to the home of the owls." (p.47) This passage shows how human life is often paired with life in nature and how the two are entwined amongst each other in the beliefs of the Native Americans. ...read more.

Throughout the village and burial grounds the tribe has maintained their totems and ancient religious symbols. Even after funeral ceremonies in which Mark gave a Christian service to the dead, after he was done the Chief would then send the soul into the afterlife through a tradition tribal service or ritual. The influence of Christianity is very vivid through the book; however the desire to keep alive ancient traditions not related to modern views comes across just as strongly. On a personal level, I found this book to be an interesting look into the culture of the Native Americans and their outlook on life and the world around us. Granted this is a very general look into their world, being that most of the nature and symbolism did not go into great detail, but encompassed a more general view of most Native American beliefs. A deeper look into a true story tribe would have been more interesting and informative I think. But as a general look at the Native Americans and what is important to them, it did a good job. The book itself is a fairly easy read for an older reader. It seems more geared to early high school students and people with little previous knowledge of the Native American ways. ...read more.