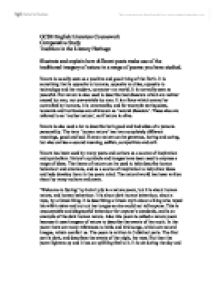 Illustrate and explain how different poets make use of the traditional imagery of nature in a range of poems you have studied.

GCSE English Literature Coursework Comparative Study Tradition in the Literary Heritage Illustrate and explain how different poets make use of the traditional imagery of nature in a range of poems you have studied. Nature is usually seen as a positive and good thing of the Earth. It is something that is opposite to humans, opposite to cities, opposite to technology and the modern, computer run world. It is normally seen as peaceful. But nature is also used to describe bad disasters which are neither caused by man, nor preventable by man. It is a force which cannot be controlled by humans, it is untameable, and for example earthquakes, tsunamis and hurricanes are all known as 'natural disasters'. These also are referred to as 'mother nature', as if nature is alive. Nature is also used a lot to describe both good and bad sides of a persons personality. The term 'human nature' has two completely different meanings, good and bad. Human nature can be generous, loving and caring, but also carries a second meaning, selfish, competitive and evil. Nature has been used by many poets and authors as a source of inspiration and symbolism. Nature's symbols and images have been used to express a range of ideas. ...read more.

This poem uses nature in a positive way to illustrate good human nature and behaviour. This shows humans in a much brighter way, and talks about children playing whilst old men and women watch on reminiscing on the times when they were the little children playing on the green. This shows the innocence of both children and old people and is contradictory to 'Welcome to Spring', which plays off the bad nature of the human race, and how we ignore serious violence. The poem is set out in 3 main parts again, but in a different order and with different meanings. The first part is the sunrise and the preparation for play. The birds "sing louder around" as in to welcome in the new day, and new life. This first verse has many references to birds and bird songs, which represent new life and new beginnings, which symbolises to the poet his childhood. The second verse is describing the poet himself, as "Old john with white hair". He is reminiscing his childhood which is described in verse one, and remembering how he used to play the games which are now replicated by the new children of the village. ...read more.

Light and sound are created by Mother Nature in this poem, and this creates the feeling of Mother Nature as a person, as if is alive. This is supposed to give the reader a sense of how powerful Mother Nature can be, and how she controls over all of us, we can not contain her. This poem is describing how Mother Nature can be seen as a person, and a mother, who looks after her children in the world with all the power she has, and when she reveals herself she is trying to protect her child, the world in this case. The poem was written to express how William Wordsworth felt about Mother Nature, as he spent much of his childhood with nature and his 'mother' who looked after him, just as she looked after everything else. The poet is using this as a way to show the world a force that he feels a special relationship with, and he almost feels as if Mother Nature is his own mother. All these poems and their poets use different styles of symbols and imagery to illustrate nature, in human nature and real nature form, and are written to express emotions the poet has. ...read more.