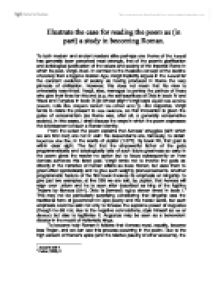 Illustrate the case for reading the poem as (in part) a study in becoming Roman. To both modern and ancient readers alike perhaps one theme of the Aeneid has generally been perceived most strongly, that of the poem's glorification and aetiological justification of the values and society of the Imperial Rome in which its poet, Vergil, lived. In contrast to the Hesiodic concept of the decline of society from a bygone Golden Age, Vergil implicitly argues in the Aeneid for the constant evolution of society as having produced in Rome the very pinnacle of civilisation. However, this does not mean that his view is universally rose-tinted: Vergil, also, manages to portray the pathos of those who give their lives for this end (e.g. the self-sacrifices of Dido in book IV and Nisus and Euryalus in book IX [at whose plight Vergil says siquid mea carmina possunt, nulla dies umquam memori vos eximet aevo1]). Like Augustus, Vergil tends to relate the present to mos maiorum, so that innovation is given the guise of conservatism (as Rome was, after all, a generally conservative society). In this essay, I shall discuss the ways in which the poem expresses the development of such a Roman identity. From the outset the poem explains that Aeneas' struggles (with which we are first met) are not in vain: his descendants are, famously, to obtain imperium sine fine, in the words of Jupiter (1.277). By book XII, that goal is within clear sight. ...read more.

against Greece by tacitly accepting their superiority in these realms, but he implies that the arts of Rome, the arts of peace and war, are what really matter. Though this may seem like an exceptionally aggressive mission, the extent to which clemency (a famous virtue of Augustus) and ultimate peace are emphasised must be noted. In the light of these ideals, Aeneas' Achillean anger towards Turnus seems 'in this light disturbing'.4 Perhaps the ideals are too idealistic to reflect reality truly. However, whether they were actually achieved or not, the ideals seem to have been held dearly in historical Rome, if we read what Claudian wrote (albeit with some degree of bias) four centuries after the time of Augustus: This is the only nation which has received conquered people in her embrace, and protected the human race under a common name like a mother not a tyrant, has called those whom she defeated her citizens, and has united the distant parts of the world in a bond of affection for her.5 One has to consider, however, that Roman bravado is often tempered in the poem. The many Trojan deaths throughout the poem are often glorified to emphasize the individual sacrifice for the communal goal. For example, Vergil's apostrophe to Lausus: 'harsh death's misfortune and your noble deeds ... I shall not indeed leave unsung, nor you, O unforgettable youth'.6 Such apostrophes seem to be based upon formulae deriving from Homeric invocations of the Muse, however, which might imply that the sentiment is not so personal as it seems.7 Dido, too, is seen as merely another obstacle ...read more.

Virgil is certainly patriotic, but he nevertheless neither shies from or tries to obscure the realities of the early-Imperial political situation. In conclusion, the Aeneid can clearly be seen as a study in becoming Roman. Aeneas' divine mission is reiterated throughout the poem with increasing intensity, especially throughout religious symbolism and prophecy: Aeneas is well aware that he must become Roman. The poem appears to move towards Roman values as it progresses, values such as pietas and clementia, in the face of Homeric impulses and aggression. However, such an analysis needs to be tempered: most notably because of such incidents as Aeneas' rage against and murder of Turnus when he sees him wearing Pallas' sword belt. Moreover, the poem continuously looks forward to a Rome to come, especially the Augustan Rome of Vergil's era. Some have seen the poem as a mere propaganda piece, but it is clear that Vergil's implicit praise for the Augustan r�gime is sophisticated and not blind to the woes of war and those who are killed to make way for the Roman superpower: to use the phrase of the Aeneid, sunt lacrimae rerum. Through imitation (and innovation), Vergil also looks back to Homer. Perhaps the best summary of the message of the Aeneid is given by the ancient commentator Servius: 'Virgil's intention is to imitate Homer and to praise Augustus by means of his ancestors.'11 Vergil may, ultimately, have succeeded in his aim, when we consider that the poem was considered a seminal text in Roman civilisation and acquaintance with the poem was a primary method of teaching ancient children not only Latin but also the 'Roman way of life'. ...read more.