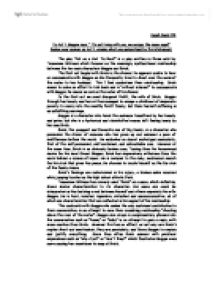 In Act 1, Maggie says, &quot; I'm not living with you, we occupy the same cage

Sarah Beck 12R In Act 1, Maggie says, " I'm not living with you, we occupy the same cage!" Basing your answer on Act 1, explain what you understand by this statement. The play "Cat on a Hot Tin Roof" is a play written in three acts by Tennessee Williams which focuses on the seemingly dysfunctional relationship between the two main characters Maggie and Brick. The first act begins with Brick in the shower; he appears unable to hear or communicate with Maggie as she frequently tries to shout over the noise of the water to her husband. This I feel symbolises their relationship. Brick seems to make no effort to talk back and is "without interest" to communicate with Maggie; he seems as cold as the water of his shower. In the first act we meet Margaret Pollitt, the wife of Brick. Maggie through her beauty and her wit has managed to escape a childhood of desperate poverty to marry into the wealthy Pollitt family, but finds herself suffering in an unfulfilling marriage. Maggie is a character who holds the audience transfixed by her beauty and poise, but she is a hysterical and dissatisfied woman left feeling lonely by her man Brick. Brick, the youngest and favourite son of Big Daddy, is a character who possesses the charm of someone who has given up and assumed a pose of indifference before the world. ...read more.

She says, " I feel like all the time I'm a cat on a hot tin roof!" By Maggie referring herself to a " cat on a hot tin roof" she shows how she is living in a state of uncomfort; she is tense, anxious and jittery. Brick tells her to "jump off the roof" implying that she should just leave him. His response is cruel; he shows he is not bothered about her. Maggie comes from a poor background and she has to "maintain some semblance of social position." However she is guilty of committing "mendacity" as not only does she lie to herself in expecting to "revive" her and Brick's s*x life and relationship. Her lies have convinced her of this as she says, "It's going to revive again." Maggie truly believes in this happening and shows her strong determination. She loves Brick unconditionally and is determined that she will win the battle for the man she loves. Maggie is a strong and dominant woman who shows her determination when she wants to tell Brick the whole story about what happened between her and Skipper. She says, " This time I am going to finish what I have to say." She is not even dampened by Brick's threat of inviting everyone upstairs, " I'd go on telling you this in front of them all." ...read more.

Even her complimentary tactics cannot sway Brick and his decisions, but her determination shines through, as she never gives up even on the most difficult situations. At the end of Act 1, the relationship of Maggie and Brick seems very fragile and vulnerable. The reason why the two are still living together is because of Maggie's sheer determination and loyalty to her husband although she is still afraid that Brick will "never make love to her again." Tennessee Williams ends the act in a crucial moment of uncertainty in the relationship between Maggie and Brick in order to build tension and keep the audiences attention. He leaves it to Brick's last words, to undermine what has been leading to Brick and Maggie resolving their conflict. As Maggie says, " There is no reason why we cannot have a child." Brick's cruel words determine this uncertainty for the rest of the play, " But how on earth do you imagine that you are going to have a child by a man that cannot stand you?" Brick is cruel but Maggie is courageous. She is an honest woman and she knows that she is not the kindest person; her constant rejection has made her like this, but she knows that she will survive, as will hers and Brick's relationship. Their relationship is intriguing and Maggie will survive for as long as she can, providing she can stay on this hot tin roof. ...read more.