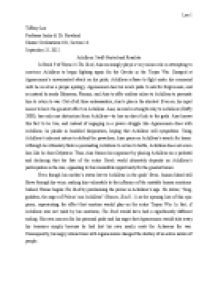 In Book 9 of Homers The Iliad, Aias seemingly plays a very minor role in attempting to convince Achilleus to begin fighting again for the Greeks

﻿Loo Tiffany Loo Professor Janko & Dr. Rowland Classic Civilizations 101, Section 14 September 25, 2012 Achilleus: Swift-Footed and Resolute In Book 9 of Homer?s The Iliad, Aias seemingly plays a very minor role in attempting to convince Achilleus to begin fighting again for the Greeks in the Trojan War. Enraged at Agamemnon?s unwarranted attack on his pride, Achilleus refuses to fight under his command until he receives a proper apology. Agamemnon has too much pride to ask for forgiveness, and so instead he sends Odysseus, Phoinix, and Aias to offer endless riches to Achilleus to persuade him to return to war. Out of all three ambassadors, Aias?s plea is the shortest. Even so, his input seems to have the greatest effect on Achilleus. Aias, second in strength only to Achilleus (Duffy 2008), has only one distinction from Achilleus?he has no direct link to the gods. Aias knows this fact to be true, and instead of engaging in a power struggle like Agamemnon does with Achilleus, he pleads in humbled desperation, hoping that Achilleus will sympathize. Using Achilleus?s inherent nature to defend the powerless, Aias preys on Achilleus?s search for honor. Although he ultimately fails in persuading Achilleus to return to battle, Achilleus does not scorn him like he does Odysseus. ...read more.

The perceptive Aias observes this whole interaction and puppeteers an angle to slant Achilleus?s redeeming qualities that conveys him as a hypocrite. While Achilleus condemns Agamemnon for dishonoring him, Aias argues that Achilleus?s concern for his honor has corrupted his leadership: ??it is best to go back quickly and tell this story, though it is not good, to the Danaans, who sit there waiting for us to come back, seeing that Achilleus has made savage the proud-hearted spirit within his body? (9:626-629). In this way, Aias has cunningly labeled Achilleus?s activism for standing up to Agamemnon?s oppression as actual selfishness and egotism. The loaded word ?savage? compares Achilleus?s actions to that of an animal, thereby branding Achilleus?s quest for honor inhumane. Aias also addresses the rest of the Greeks?he establishes that their morale depends on whether or not Achilleus can be persuaded to return to war. As previously explained in Book 1, Achilleus has already challenged the nature of the Greek hierarchy, believing that its leadership is corrupt. However, by pointing out that the Achaians see ?swift-footed? Achilleus as their true leader, Aias implies that if he stands by and watches these men perish without even attempting to assist them, his leadership is equally as poor as that of Agamemnon. ...read more.

He states, ??the injured man?s heart is curbed, and his pride, and his anger/when he has taken the price; but the gods put in your breast a spirit/not to be placated, bad, for the sake of one single girl? (Homer, Iliad 9:635-637). In essence, he argues that most men would be happy to be repaid in minimal treasures for the death of a child, yet Achilleus is ungrateful, unwilling to accept Agamemnon?s grand generosity. Aias goes on to seek affection from Achilleus: ?from the multitude of the Danaans, we who desire beyond all others to have your honor and love, out of all the Achaians? (Homer, Iliad 9:641-642). This call to Greek unity once again puts a great deal of pressure on Achilleus?s choice. Aias?s minimal interaction with Achilleus indirectly brings out the best in Achilleus. As a result, although Aias is a mastermind of deception, Achilleus is also mindful of his tactics. Aias preys on Achilleus?s most cherished qualities, and then skews the perspective so that Achilleus?s choices resemble that of Agamemnon, arguably the worst leader of the time. This does not influence Achilleus?s decision because of his humility; he already acknowledges that his leadership skills are not perfect. Achilleus?s resolute stance on withholding from war is not the result of stubbornness. On the contrary, this is the result of Achilleus?s respect for the gods? wishes. Achilleus is thereby the perfect exemplar for Homeric heroes?he would sacrifice his life to please the gods. ...read more.