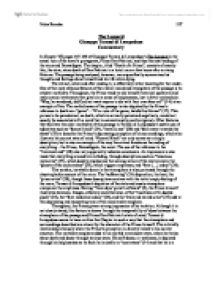 In Chapter VII pages 167-169 of Giuseppe Tomasi di Lampedusa's The Leopard is the actual ruin of the novel's protagonist, Prince Don Fabrizio

The Leopard Giuseppe Tomasi di Lampedusa Commentary In Chapter VII pages 167-169 of Giuseppe Tomasi di Lampedusa's The Leopard is the actual ruin of the novel's protagonist, Prince Don Fabrizio, and thus the near-ending of the story and Donnafugata. The chapter, titled "Death of a Prince", consists of exactly this; the slow, alone death of Don Fabrizio in a hotel room a few hours after arriving Palermo. The passage being analysed, however, more specifically summarizes his thoughts and feelings about himself and his life while dying. The extract, while and after reading it, is effectively rather haunting for the reader. One of the most obvious features of the overall mood and atmosphere of the passage is its evident morbidity. Throughout, the Prince tends to ask himself rhetorical questions and make cynical statements that give him a sense of helplessness, lost in bitter melancholy. "Why, he wondered, did God not want anyone to die with their own face on?" (5-6) is an example of this. The morbid sense of the passage is also depicted by the Prince's reference to death as a "game" - "It's a rule of the game; hateful but formal" (17). ...read more.

This is briefly mentioned previously where the Prince's perception is directly linked to his current situation. The morbid atmosphere adds to his morbid reminiscent state, where he thinks about death and decay through various ways. His self-decay, or weakness, is depicted through his helplessness as he feels he is unable to "contravene" (14) and that he is a "prey of untameable currents" (54) - a victim of his circumstances. This is even despite his attempt to maintain composure - "immersed in that great outer silence, in that terrifying inner rumble" (37). One interesting feature of this passage is the way the Prince bitterly makes ironic comparisons and contrasts of his current dying state to his previous healthy state. For example, "to hold up a razor would have been like holding up his own desk, before" (14-15), or "he found that to give way to drowsiness now would be as absurd as eating a slice of cake immediately before a longed-for banquet" (34-35), which indirectly contributes to the extract's resentful tone. When the Prince contemplates the downfall of everything around him, it is as if 'his life is flashing before his eyes', as he is remembering everything of significance to him. ...read more.

A last but important theme that this extract illustrates is the concept of isolation and solitude. The Prince makes it very clear here that he is alone as he is not interrupted by personally close characters during the excerpt. He seems as if he is in his own little world of thoughts, which already makes him emotionally isolated. The reader can only know he is alone for certain though by the last line, "He was alone, a shipwrecked man adrift on a raft" (54). This passage of Chapter VII from The Leopard is very significant in depicting the various themes and writing styles of Giuseppe Tomasi di Lampedusa throughout the novel. The strong atmosphere and mood of the extract strongly facilitates the depiction of Prince Don Fabrizio's state of mind. The contrast of his behaviour and thinking in this passage and chapter to his behaviour and thinking throughout the rest of the novel makes this extract very interesting to analyse. However what inclines to be the most evocative feature in the overall passage is Tomasi di Lampedusa's ability to express the protagonist's subjective, bitter views through his own objective narration. The effect of Chapter VII is thus a lasting one. ?? ?? ?? ?? Nisha Kanabar 11T ...read more.