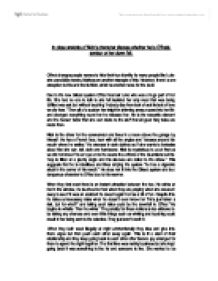 In close analysis of Nick&amp;#146;s character discuss whether he is Offreds saviour or her down fall.

In close analysis of Nick's character discuss whether he is Offreds saviour or her down fall. Offred changes people names to hide their true identity for many people like Luke she uses bible names, Mathas are another example of this. However, there is one exception to this and that is Nick, which is another name for the devil. Due to the new Gilead system Offred has lost Luke who was a huge part of her life. She had no one to talk to she felt isolated her only need that was being fulfilled was s*x but without touching "nobody dies from lack of s*x its lack of love we die from." Then all of a sudden her knight in shinning armour came into her life and changed everything round her he released her. He is the romantic element and the human factor that she can relate to the stuff that all good fairy tales are made from. ...read more.

He winks at her in the window, he touches her foot when they are praying when she moves it away to see if it was an accident he does it again he has a bit of fun. Despite this he takes unnecessary risks when he doesn't even know her "He's just taken a risk, but for what?" and taking such risks could be the downfall to Offred "He begins to whistle. Then he winks." The penalty for these notions is too extreme to be taking any chances and even little things such as winking and touching could result in her being sent to the colonies. They just aren't worth it. When they both meet illegally at night unintentionally they kiss and give into there urges but then push each other away again. This is the start of their relationship and they keep going back to each other after Serena-joy arranged for them to spend the night together. ...read more.

This shows a sign of trust . Nick is also very jealous when the commander and Offred are together he gets he spies on her. If this jealousy develops you don't the consequences he could kill her or turn her in. It could have developed like this. In conclusion Nick saves her because he takes her away at the end. He also releases her from the pressure and tension of Gilead. He tries to make everything feel as normal as possible the way it used to be by having a relationship the sneaking around is like a stimulant but Offred should be used to it due to her affair with Luke. He also gets her pregnant which means that even if he didn't save her at the end it meant that she wouldn't have to go to the colonies. However, he does take huge risks, which would mean that he is endangering his and her life for cheap thrills such as winking and touching her foot. ...read more.