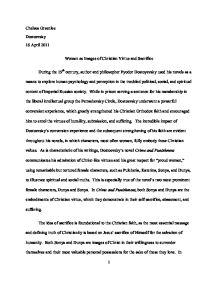 In Crime and Punishment, both Sonya and Dunya are the embodiments of Christian virtue, which they demonstrate in their self-sacrifice, abasement, and suffering.

Chelsea Greenlee Dostoevsky 16 April 2011 Women as Images of Christian Virtue and Sacrifice During the 19th century, author and philosopher Fyodor Dostoyevsky used his novels as a means to explore human psychology and perception in the troubled political, social, and spiritual context of Imperial Russian society. While in prison serving a sentence for his membership in the liberal intellectual group the Petrashevsky Circle, Dostoevsky underwent a powerful conversion experience, which greatly strengthened his Christian Orthodox faith and encouraged him to extol the virtues of humility, submission, and suffering. The incredible impact of Dostoevsky's conversion experience and the subsequent strengthening of his faith are evident throughout his novels, in which characters, most often women, fully embody these Christian values. As is characteristic of his writings, Dostoevsky's novel Crime and Punishment communicates his admiration of Christ-like virtues and his great respect for "proud women," using remarkable but tortured female characters, such as Pulcheria, Katerina, Sonya, and Dunya, to illustrate spiritual and social truths. This is especially true of the novel's two most prominent female characters, Dunya and Sonya. In Crime and Punishment, both Sonya and Dunya are the embodiments of Christian virtue, which they demonstrate in their self-sacrifice, abasement, and suffering. The idea of sacrifice is foundational to the Christian faith, as the most essential message and defining truth of Christianity is based on Jesus' sacrifice of Himself for the salvation of humanity. ...read more.

He discerns immediately from his mother's description of the engagement the sacrificial nature of Dunya's act. As he explains that Dunya's pride would never allow her to marry Luzhin for herself or for money, he recognizes her engagement an act for the betterment of her family: The man is clear to her, and she'll have to live with this man. She could eat only black bread and wash it down with water, but she would never sell her soul, she would never trade her moral freedom for comfort...The thing is clear: for herself, for her own comfort, even to save herself from death, she wouldn't sell herself; no she's sell herself for someone else! For a dear, beloved person she will sell herself! That's what our whole catch consists of: for her brother, for her mother, she will sell herself.10 Despite the incredible significance of Dunya's gift, Raskolnikov is displeased by her engagement, specifically with sacrifice which he discerns has been made according to his interests and also the interests of his mother. As he wanders around Petersburg, pondering his mother's letter, Raskolnikov mutters, "I don't want your sacrifice, Dunechka."11 Dunya, who serves as a picture of Christ to Raskolnikov, believes that she can offer salvation to Raskolnikov, a gift in which he is uninterested. Raskolnikov creates the connection between Christ's sacrifice and Dunya's engagement to Luzhin, likening the marriage to Jesus' sacrifice on the cross: "I also know what ...read more.

Much like Christ, both Sonya and Dunya offer salvation through suffering and abasement. As pictures of Christian virtuosity, Sonya represents spiritual salvation for Raskolnikov, while Dunya represents personal salvation for Svidrigailov. Dunya and Sonya are clear images of Christ in the salvation they offer. As it is the responsibility of every person to pursue the salvation that Christ provides, Raskolnikov and Svidirigailov attempt to achieve salvation through Sonya and Dunya. Raskolnikov, representing the image of the man who finds salvation through Christ, is restored to life. Svidrigailov, however, due to his carnality, demonstrates the death that results from failure to access salvation. Dostoevsky uses the structure of Crime and Punishment and the characters within the novel, including Dunya and Sonya, to demonstrate the message of the Gospel. Through his work, Dostoevsky expresses the need of every person for salvation and extols the Christian virtues that Dunya and Sonya represent. 1 Fyodor Dostoevsky, Crime and Punishment, Trans. Richard Pevear and Larissa Volokhonsky, (New York: Knopf, 1993), 238. 2 NKJV Study Bible, Ed. Earl D. Radmacher, Ronald B. Allen, and H. Wayne House, 2nd ed, (Nashville: Thomas Nelson, 1997). 3 Dostoevsky, 18. 4 Ibid. 5 NKJV, Matthew 26:39. 6 Dostoevsky, 30. 7Dostoevsky, 37. 8 Ibid. 9 Ibid., 39, 43. 10 Ibid., 43. 11 Ibid., 44. 12 Ibid., 40. 13 NKJV, John 1:14. 14Dostoevsky, 14. 15 Ibid., 322. 16 Ibid., 199. 17 Ibid., 304-305. 18 Ibid., 322. 19NKJV, 2 Corinthians 5:21. 20 Dostoevsky, 515. ?? ?? ?? ?? 1 ...read more.