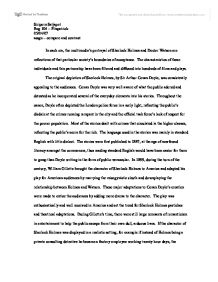 In each era, the multimedia's portrayal of Sherlock Holmes and Doctor Watson are reflections of that particular society's boundaries of acceptance.

In each era, the multimedia's portrayal of Sherlock Holmes and Doctor Watson are reflections of that particular society's boundaries of acceptance. The characteristics of these individuals and this partnership have been filtered and diffused into hundreds of films and plays. The original depiction of Sherlock Holmes, by Sir Arthur Conan Doyle, was consistently appealing to the audiences. Conan Doyle was very well aware of what the public adored and detested as he incorporated several of the everyday elements into his stories. Throughout the canon, Doyle often depicted the London police force in a surly light, reflecting the public's disdain at the crimes running rampant in the city and the official task force's lack of respect for the poorer population. Most of the stories dealt with crimes that circulated in the higher classes, reflecting the public's scorn for the rich. The language used in the stories was mainly in standard English with little dialect. The stories were first published in 1887, at the age of newfound literacy amongst the commoners, thus reading standard English would have been easier for them to grasp than Doyle writing in the form of public vernacular. ...read more.

He had requested to Doyle's daughter, Jame Dean Conan Doyle, to cease Holmes' drug habit. The Granada series taped specific segments where they show Holmes in conflict over the seven- percent solution of cocaine but always rejecting it. This demonstrates society's struggle to dispel the hippie era of promoting drug use and to filter the contents on television for the safety of the children. Modern characters that have adopted the Sherlock Holmes phenomena have created legendary "flawed" heroes. Conan Doyle constructed a monstrous genius that had all the foibles and charms of being human, a character the public could admire yet not set him at a high pedestal because of his eccentricities. In Chris Carter's The X-Files, one of the main characters in the series, Fox Mulder, is nicknamed "Spooky" Mulder because of his obsession with the paranormal and his work. He is depicted as a genius with an eidetic memory. Sherlock Holmes was also known to easily retain out of the way knowledge and was an omnivorous reader. The sleuth's obsessive character trait is seen in his devotion to his work and the constant lapse of energy Holmes suffered when he was idle. ...read more.

In all three of these modern heroes, they share a prized emotional distance and objectivity that created a sense of superiority and control in their actions. These qualities became part of their trademark, just as Sherlock Holmes was so celebrated for his emotional distance and objectivity. In some movies, the interpretation of Sherlock Holmes and Doctor Watson created mild controversy. In Billy Wilder's 1970 movie The Private Life of Sherlock Holmes, the famous Baker Street sleuth was implied to be h********l and Robert Stephens' interpretation of the character created an overly effeminate Holmes. During that era, homosexuality was not as openly accepted to the public, thus the critics responded to this movie with a mixture of vehemence and praise. Mainly they scoffed at the terrible relationship depicted between Holmes and Watson and lightly danced over the implied homosexuality. In Basil Rathbone's debut as Sherlock Holmes, Twentieth Century Fox's 1939 film The Hound of the Baskervilles, at the end of the production, Holmes' last words are calling to Watson to bring him "the needle" for his cocaine. Many of the critics believed that this one statement alone should have bumped the rating of the movie to a PG-13 because younger audience members might think to follow Holmes' example. Satjapot 2 Siriporn Satjapot Eng 106 - Fitzpatrick 05/04/07 assgn - compare and contrast ...read more.