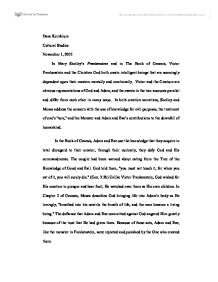 In Mary Shelley's Frankenstein and in The Book of Genesis, Victor Frankenstein and the Christian God both create intelligent beings that are seemingly dependent upon their masters mentally and emotionally.

Dana Kornblum Cultural Studies November 1, 2002 In Mary Shelley's Frankenstein and in The Book of Genesis, Victor Frankenstein and the Christian God both create intelligent beings that are seemingly dependent upon their masters mentally and emotionally. Victor and the Creature are obvious representations of God and Adam, and the events in the two accounts parallel and differ from each other in many ways. In both creation narratives, Shelley and Moses address the concern with the use of knowledge for evil purposes, the treatment of one's "son," and the Monster and Adam and Eve's contributions to the downfall of humankind. In the Book of Genesis, Adam and Eve use the knowledge that they acquire in total disregard to their creator; through their curiosity, they defy God and His commandments. The couple had been warned about eating from the Tree of the Knowledge of Good and Evil. God told them, "you must not touch it, for when you eat of it, you will surely die." (Gen. 3:3b) Unlike Victor Frankenstein, God wished for His creation to prosper and bear fruit; He watched over them as His own children. In Chapter 2 of Genesis, Moses describes God bringing life into Adam's body as He lovingly, "breathed into his nostrils the breath of life, and the man became a living being." ...read more.

Frankenstein's Creature, then, blames Frankenstein for the ills that the world feels towards him because of his hideousness, but at the same time refuses to take responsibility for himself. "Remember, that I am thy creature: I ought to be thy Adam; but I am rather the fallen angel, whom thou drivest from joy for no misdeed. Every where I see bliss, from which I am irrevocably excluded. I was benevolent and good; misery made me a fiend." In Genesis, God gave Adam a companion. Adam was not merely a creation to fulfill an experiment but rather created to procreate and make more lives. He received nurtured care from God- a father figure. God rejected Adam from the Garden of Eden yet never deserted him entirely. God created Adam with benevolent intentions. On the other hand, Frankenstein created the creature to further his own education. Frankenstein never had loving feelings towards his creation. One example of Frankenstein's complete disregard for his creation is demonstrated by Victor's inattention to the creature's physical appearance. He builds the creature with an enormous frame and grotesque appearance. With his "profane fingers" he assembled his "filthy creation"- never considering how such a creature would be able to coexist with human beings or live normally. ...read more.

Instead of facing his conscience and assuming responsibility for his experiment, he runs away from his creation at every turn. Victor Frankenstein's ignorance, ill preparation, and abusive treatment towards the monster leaves him without any sense of belonging or hope for his future. The Monster is a victim of curiosity, scientific advancement in technology, society's prejudices, and of fear. He comments, "Of my creation and creator I was absolutely ignorant, but I knew that I possessed no money, no friends, no property." (Chap 13) He wanders aimlessly across the countryside searching for some place where he can live without ridicule or being ostracized, finally ending his search with the De Laceys, a family that had also been ostracized--exiled from France because of treason towards their government. Mary Shelley employs the theme of creation very heavily in her novel Frankenstein. In Frankenstein and the Holy Bible, two aspects of creation appear. The first of these is whether the creator is prepared for His responsibility. The second is nurture and punishment to the creations accordingly, in order to further advance the mind and teach right and wrong. Using knowledge for purposes of evil, l and poor treatment of the uneducated is a reality that we all face. These narratives illustrate to our society how even today, the treatment of others and the preservation and positive usage of our knowledge is so crucial in creating a strong, confident community. ...read more.