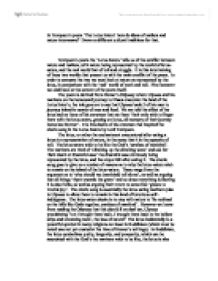 In Tennyson's poem 'The Lotus Eaters' how do ideas of realism and nature interweave? Draw on different cultural traditions for that.

In Tennyson's poem 'The Lotus Eaters' how do ideas of realism and nature interweave? Draw on different cultural traditions for that. Tennyson's poem the 'Lotus Eaters' tells us of the conflict between nature and realism, with nature being represented by the world of lotus-eaters, and the real world that of toil and struggle. It is this intertwining of these two worlds that present us with the main conflict of the poem. In order to compare the two we must look at nature as represented by the lotus, in comparison with the 'real' world of work and toil. First however we shall look at the context of the poem itself. The poem is derived from Homer's Odyssey where Ulysses and his mariners on the homeward journey to Ithaca encounter the land of the Lotus Eater's, the tale goes on to say that Ulysses bade 3 of his men to journey inland in search of men and food. We are told the effect of the lotus had on those of his crewmen that ate them 'their only wish to linger there with the lotus eaters, grazing on lotus, all memory of their journey home lost forever'. ...read more.

The choric song is essentially the lotus eating mariners plea to Ulysses to allow them to remain in this land of luxurious self-indulgence. The lotus-eaters desire is to stay with nature to 'lie reclined on the hills like Gods together, careless of mankind'. However we know from reading the Odyssey that this plea fell on deaf ear, Ulysses proclaiming 'but I brought them back, I brought them back to the hollow ships and streaming tears', the loss of nature? The lotus incidentally is a powerful symbol in many religions not least in Buddhism (which must be noted was not yet created at the time of Homer's writings). In Buddhism, the lotus symbolizes purity, longevity, and prosperity, which can be associated with the God's the mariners wish to be like, the lotus is also supposed to be the first flower bloomed in the beginning of this cosmic world. Let us now look at the real world, away from the land of the lotus-eaters, the world that the lotus-eating mariners describe with contempt with that in comparison of the dreamful ease they experienced under the influence of the lotus. ...read more.

In the land of the lotus-eaters nothing IS but everything seems. The final stanza in the choric song the lotus-eaters describe their land as a 'hollow' land, indicating that this land is somehow insubstantial. So in conclusion the world of the lotus-eaters is one of great attraction to the mariners, here they would live in peace and happiness, but are prevented to do so by Ulysses who are driven back to the ship and the real world of endless toil tearfully. Is this a defeat of nature, as those that wish to remain with Her are prevented of doing so? I do not think so, as the land and the lotus's remain. It should be noticed too that the poem is an inversion of the biblical story of Adam and Eve, who upon eating the fruit are condemned to 'labour by the sweat of his brow' whereas in the Lotus-Eaters, upon eating the fruit they no longer suffer this toil. ...read more.