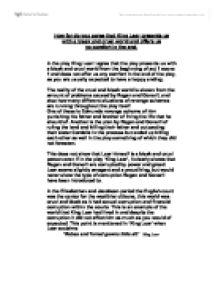 How far do you agree that King Lear presents us with a bleak and cruel world and offers us no comfort in the end. In the play King Lear I agree that the play presents us with a bleak and cruel world from the beginning of act 1 scene 1 and does not offer us any comfort in the end of the play, as you are usually expected to have a happy ending. The reality of the cruel and bleak world is shown from the amount of problems caused by Regan and Goneril, and also how many different situations of revenge schemes are running throughout the play itself. ...read more.

This does not show that Lear himself is a bleak and cruel person even if in the play 'King Lear', it clearly shows that Regan and Goneril are corrupted by power and greed. Lear seems slightly arrogant and a proud king, but would never show the type of corruption Regan and Goneril have been introduced to. In the Elizabethan and Jacobean period the English court was the center for the wealthier citizens, this world was cruel and bleak as it had s****l corruption and financial corruption within the courts. This is an example of the world that King Lear had lived in and despite the corruption it did not affect him as much as you would of expected. ...read more.

This leaves Edmund unsuspectingly the King, here Edmund is showing the world that an illegitimate child of Gloucester has become king of a country and has more power than anyone as being known as the king is as being known as god himself in person. In conclusion after discussing the points of how far does Lear present us with a bleak and cruel world, it shows with the country in control by Edmund it shows a far worse scenario than ever possibly imagined when the country was ruled by Regan and Goneril showing a very bleak and cruel world for the future. ...read more.