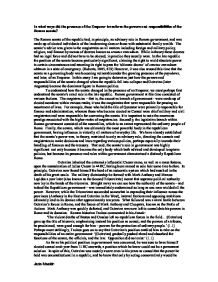 In what ways did the presence of the Emperor transform the powers and responsibilities of the Roman senate?

In what ways did the presence of the Emperor transform the powers and responsibilities of the Roman senate? The Roman senate of the republic had, in principle, an advisory role in Roman government, and was made up of elected individuals of the landowning class or those with substantial family wealth. The senate's advice was given to the magistrates on all matters including foreign and military policy, religion, and finance by means of decrees known as senatus consultum. While in theory these decrees had no legal force and did not have to be obeyed, in practice they usually were. In the late republic the position of the senate became particularly significant, claiming the right to wield absolute power in certain circumstances and asserting its right to pass the 'ultimate decree' of senatus consultum ultimum in a state of emergency. (Roberts, 2005, 639) However, it was also around this time that the senate as a governing body was becoming vulnerable under the growing presence of the populares, and later, of an Emperor. In this essay I am going to determine just how the powers and responsibilities of the senate changed when the republic fell into collapse and Octavian (later Augustus) became the dominant figure in Roman politics. To understand how the senate changed in the presence of an Emperor, we must perhaps first understand the senate's exact role in the late republic. ...read more.

and, according to Olivia Robinson, personal inviolability. (1997, 10) More significantly, the senate granted Octavian imperium over all of Rome's military affairs for ten years and the largely symbolic name of Augustus. Ironically, Augustus was granted back the power he had once relinquished in his outward attempt to restore the face of the republic. And so began Augustus' principate. Olivia Robinson again notes: 'It is clear that the Republic had been failing for a century before Augustus' settlement of the constitution, a settlement which marks the start of the principate.' (1997, 9) However, she is also sure to mention that, at least outwardly: 'the assemblies, the senate and the magistracies all continued in theory to function as they had done before, but Augustus was consul every year until 23BC, with proconsular imperium in the frontier provinces; he controlled the armies... he took over from the senate and centuriate assembly the power to make war and peace, according to the statement of imperial powers.' (10) This makes clear that the responsibilities of maintaining and controlling the army, a position once held by the senate, now rested on the shoulders of one man. Nevertheless, the senate's own enthusiasm to bestow upon Augustus titles which gave him more political power and protection, suggests confidence within the senate was low, or at least, optimism for Augustus was high, if only to deal with the aftermath of many wars in the turbulent late republic. ...read more.

they had previously done in the republic, his own position was secure and task to finding a successor within the family became of particular importance. Despite the fact that a majority of matters including foreign and military policy now lay in the hands of the Emperor, the senate still played a vital role in both administration and law-making, indeed, from the beginnings of the Roman Empire an Emperor's power had to be fully and constitutionally invested from the senate by means of a decree, thus the very acknowledgement of the senate's importance was vital. (N. Lewis and M. Reinhold, 1955, 88) To put it simply, Augustus succeeded in persuading the senators that he was head of the Roman state, whilst at the same time allowing them to maintain their own roles and ambitions. The senate's importance under the Emperor did not much change after Augustus died. Augustus was fortunate enough to live past 70, and his long reign perhaps ensured any changes he made within government were permanent. He was succeeded by his adopted son Tiberius, who in turn, not only preserved the role of the senate but bestowed more power upon it. Imperial policy was still being debated in the senate at least until the third century, and, more importantly, the senate's role in government became just as vital in imperial Rome as it had been in the republic. ...read more.