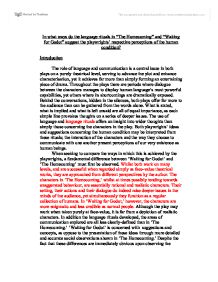 In what ways do the language rituals in &quot;The Homecoming&quot; and &quot;Waiting for Godot&quot; suggest the play wrights' respective perceptions of the human condition?

In what ways do the language rituals in "The Homecoming" and "Waiting for Godot" suggest the playwrights' respective perceptions of the human condition? Introduction The role of language and communication is a central issue in both plays on a purely theatrical level, serving to advance the plot and enhance characterisation, yet it achieves far more than simply forming an entertaining piece of drama. Throughout the plays there are periods where dialogue between the characters manages to display human language's most powerful capabilities, yet others where its shortcomings are dramatically exposed. Behind the conversations, hidden in the silences, both plays offer far more to the audience than can be gathered from the words alone. What is stated, what is implied and what is left unsaid are all of equal importance, as each simple line provokes thoughts on a series of deeper issues. The use of language and language rituals offers an insight into wider thoughts than simply those concerning the characters in the play. Both playwrights' ideas and suggestions concerning the human condition may be interpreted from these rituals; the interaction of the characters and the way they choose to communicate with one another present perceptions of our very existence as human beings. When seeking to compare the ways in which this is achieved by the playwrights, a fundamental difference between 'Waiting for Godot' and 'The Homecoming' must first be observed. Whilst both work on many levels, and are successful when regarded simply as face-value theatrical works, they are approached from different perspectives by the author. The characters in 'The Homecoming,' whilst at times possibly tending towards exaggerated behaviour, are essentially rational and realistic characters. Their setting, their actions and their dialogue do indeed raise deeper issues in the minds of the audience, yet simultaneously they function as a regular collection of humans. In 'Waiting for Godot,' however, the characters are more enigmatic and less credible as normal people. ...read more.

His devious attempts at manipulating those around him cause his opinions and even his memories to swing wildly back and forth. Of his wife's relationship with his boys he recalls: MAX: ...She taught them all the morality they know. And she had a heart to go with it. What a heart. Within seconds, as he is gripped by anger concerning Sam's leaving late for work, she has become his 'slutbitch of a wife.' This volatility even occurs at times without provocation, as he remembers her once more: MAX: ...Even though it made me sick just to look at her rotten stinking face she wasn't such a bad b***h. A second example of how Max is willing to totally contradict himself in order to support what he is saying at a specific moment is with regard to his age. As the male struggles for supremacy, notably between Max and Lenny, become apparent, it is clear that Max's age is a sensitive issue. As Lenny refuses to give him a cigarette, he tries to make him feel guilty by displaying his one crumpled cigarette and saying 'I'm getting old, my word of honour.' In his next sentence, infuriated by Lenny's silent stubbornness, he remarks 'I could have taken care of you twice over. I'm still strong.' The same characteristic is displayed by Ruth upon her arrival with Teddy in the night. She requests permission to wit down, remarking 'I'm tired.' A while later, when asked if she is tired by her husband, she changes her mind to: 'Just a little.' By the time she is asked a third time, she has altered her opinion completely and replies 'No.' She behaves in the same way with Lenny, declining to accept his offer of a drink, yet by the end of their encounter she drains the glass and states 'Oh, I was thirsty.' The same sort of unpredictability is displayed by the register of language the charatcers choose to use. ...read more.

Yet they persist, driven by a need to divert their attentions from the truth of their lives and existence. This failure to connect fully with others, this inner knowledge of the true reason for the desire to talk, isolates the individual yet further. However there also seems to be an agreement between the playwrights that to crumble in the face of these bleak ideas is futile. One's position is unalterable, and the introduction of humour into both plays makes it clear that we must not totally despair. Laughter reminds the audience that, in spite of our isolation and hopeless predicament, life must carry on as we are powerless to change our circumstances. It provides the glimmer of hope we require to continue. Though we may be condemned to suffer and to waste our lives with conversations leading nowhere, we must try to smile as we do so as there is 'nothing [else] to be done.' (Laughter in the play does not mean we should seek laughter in life. It is symbolic of anything which gives us hope and motivation.) [My conclusion is a bit rubbish because I find it hard to write about both playwrights' ideas simultaneously whilst also distinguishing bewteen them. As I see it, any ideas which come through 'The Homecoming' are directly concerned with human interaction. This can be extended to tie in with thoughts about existence itself, but there is nothing so obviously in the text itself as there is with 'Waiting for Godot.' Beckett gives both a view of the human condition as a period of waiting filled by meaningless distraction, but I find it hard to find any such broad and general perception within Pinter's work. I keep mentioning how people need to talk, build routines and seek distraction from thei hopeless existence, but the actual mentioning of this hopeless existence appears only in 'Waiting for Godot.'] ...read more.