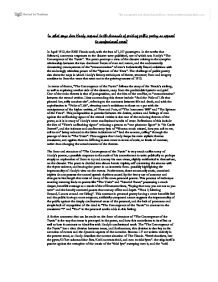 In what ways does Hardy respond to the demands of writing public poetry as opposed to confessional verse?

In what ways does Hardy respond to the demands of writing public poetry as opposed to confessional verse? In April 1912, the RMS Titanic sank, with the loss of 1,517 passengers. In the weeks that followed, numerous responses to the disaster were published, one of which was Hardy's "The Convergence of the Twain". The poem portrays a view of the disaster relating to the complex relationship between the two dominant forces of man and nature, and the understatedly devastating consequences of the "consummation" of man's hubristically flawed ambitions with the enduringly relentless power of the "Spinner of the Years". The challenge of public poetry also alters the ways in which Hardy's literary techniques of theme, structure; form and imagery combine to form the verse that went out to the grieving masses of 1912. In terms of theme, "The Convergence of the Twain" follows the story of the Titanic's sinking, as well as exploring another side of the disaster, away from the predictable hysteria and grief. One of the main themes is that of juxtaposition, and the idea of the conflict, or "consummation" between the eternal verities. Ideas surrounding this theme include "And the Pride of Life that planned her, stilly couches she", referring to the contrasts between life and death, and with the capitalisation in "Pride of Life", elevating man's ambitions to those on a par with the omnipotence of the higher verities, of Time and Fate, of "The Immanent Will" and "The Spinner of the Years". ...read more.

This is accentuated by the almost anecdotal quality that the poem takes on in stanza VI, the "Well:" exemplifies this change in tone to a recollection of events, and it is the linguistic devices and the way that they are employed against each other that portray the context of the story, rather than any personal views of the narrator. An example of this is "And as the smart ship grew/In stature, grace and hue/In shadowy silent distance grew the Iceberg too"- this line lacks in narrative perspective on events, but effectively portrays the motives and ideas behind it, the idea that the two beings were destined to meet. This use of meaning through pure language over any sort of poetic or narrative perspective contrasts with Hardy's consistent usage of personal pronouns for effect in his confessional lyrics. This can be exemplified by "The Voice", "Woman much missed, how you call to me, call to me" and "Neutral Tones", "The smile on your mouth was the deadest thing"- these ideas are antithetical in content, but the use of personal pronoun heightens the accentuates the effect. This contributes with the personally driven and affectionate tone of the line from "The Voice", and equally the maliciously pertinent tone of "Neutral Tones", something that Hardy achieves in "The Convergence of the Twain" without this personal perspective, either through a lack of identification with the events, or through his own belief that he can best portray his ideas without the use of direct address. ...read more.

gives them an air of irreconcilability, similar to the opposition of "the creature of cleaving wing" and "sinister mate" of "The Convergence of the Twain". Finally, irrelevance of man in the eyes of Time, and the idea of circumstance being more powerful than any emotion or action that humans can muster, is featured extensively in "The Convergence of the Twain", "The Spinner of the Years said "Now!! And each one hears/And consummation comes", and also in Hardy's personal works. Examples of this include "I look behind on the fading byway", as Time causes the clarity of the memory to gradually dissipate. This can be interpreted in many ways, with the possibility of the happy memories fading, or the present fading against the stark, important past. The fact that this interpretation is multi-faceted furthers the idea of Time's power, and the inability of humans, with either personal thought or the building of an elitist vessel, to prevent it from crushing everything in its path. In conclusion, Hardy's responds to the challenge of writing a public piece, as opposed to his deeply confessional private verse, with a skilful blend of the literary techniques that go into any piece of verse. However, the levels of sophistication and subtly are adroitly varied to present the contrast between the impersonal, stark reality of "The Convergence of the Twain", and the emotional confusion, angst and torment that similar themes and ideas cause him in his confessional verse- in effect, Hardy simply uses the opposites of consistency and variation together, as with the opposition that features in both audiences of his verse. ...read more.