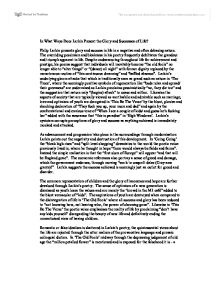 In What Ways Does Larkin Present the Glory and Successes of Life?

In What Ways Does Larkin Present the Glory and Successes of Life? Philip Larkin presents glory and success in life in a negative and often debasing nature. The overriding pessimism and bleakness in his poetry frequently debilitates the grandeur and triumph apparent in life. Despite endeavouring throughout life for achievement and prestige, his poems suggest that individuals will inevitably become "the old fools" no longer able to "alter things" or "(dance) all night" with former dignity replaced by the monotonous routine of "thin continuous dreaming" and "baffled absence". Larkin's underlying gloom attacks that which is traditionally seen as grand such as nature in 'The Trees', where the seemingly positive symbols of regeneration like "buds relax and spread/ their greenness" are undermined as Larkin proclaims pessimistically "no, they die too" and the suggestion that nature only "(begins) afresh" to cease and wither. Likewise the aspects of society that are typically viewed as worthwhile and admirable such as marriage, love and optimism of youth are derogated in 'This Be The Verse' by the blunt, plosive and shocking declaration of "They f**k you up, your mum and dad" and again by the confrontational and envious tone of "When I see a couple of kids/ and guess he's f*****g her" added with the assurance that "this is paradise" in 'High Windows'. ...read more.

Larkin highlights the distorted view of life and recognises the actuality of how bleak it is. Glory and success of life is also undermined through the constant reminders of ageing and death. Larkin presents a tedious existence where "man hands on misery to man" and despite all efforts, and apparent fulfilment there is the sombre actuality that "death will be such another thing/ with all we have done not mattering". Larkin's blunt facts about our finite duration undermine the glory that is life and diminish success. There is uncertainty in all of Larkins poems, what seems initially negative can be seen in a positive light. Larkin's poetry is mostly pessimistic and despondent however there are elements of recognition of the glory and success of life, in 'Going Going' Larkin speaks about England positively. Larkin patriotically admires "the meadows, the lanes, the guildhalls, the carved choirs" which is overshadowed by the bleak and despairing context of the poem. Larkin's use of confrontational diction is contrasted with occasional soft, poetic images such as "the sun comprehending glass, and beyond it the deep blue air, that shows nothing, and is nowhere, and is endless" in the final stanza of 'High Windows'. The sense of openness and infinite is shown through the contemplative caesuras and vagueness of the stanza, its positivity towards life is in stark opposition to the blunt colloquialism and specific reference to "a couple of kids...f*****g" mentioned in the first stanza. ...read more.

Larkin's own ridicule of the poetic voice would seem to support the success and glory of life as it undermines the attack upon it through exposing the poetic voice to feel this way due to their own jealousy and resentment. The overriding sense of failure and disappointment devaluates glory and success as anything that is achieved is viewed in a cavilling light. Modernisation, marriage, and parenthood are all analysed until fault appears - the simple blunt declaration that "they f**k you up your mum and dad they mean not mean to but they do" in 'This be the verse' dismisses the effort made by parents to raise their children. Likewise the simplicity and initial joy of life in 'Days' that are "to be happy in: where can we live but days?" is shattered by the ominous hints of death with the "priest and the doctor". Perhaps this suggests an afterlife, however Larkin's strong views and attacks on the nature of religion and people's beliefs such as in 'Church Going' where the poetic voice ends "at a loss" after visiting the church declared as a "special shell" which will inevitably "like belief....die" would seem to contradict this. Larkin seems preoccupied with failure and seeks out disappointment, which invariably echoes in life and crushes that which is held as successful and gratifying. ...read more.