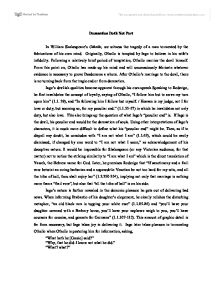 In William Shakespeares Othello, we witness the tragedy of a man tormented by the fabrications of his own mind. Originally, Othello is tempted by Iago to believe in his wifes infidelity.

Damnation Doth Not Part In William Shakespeare's Othello, we witness the tragedy of a man tormented by the fabrications of his own mind. Originally, Othello is tempted by Iago to believe in his wife's infidelity. Following a relatively brief period of temptation, Othello marries the devil himself. From this point on, Othello has made up his mind and will unconsciously fabricate whatever evidence is necessary to prove Desdemona a whore. After Othello's marriage to the devil, there is no turning back from the tragic end or from damnation. Iago's devilish qualities become apparent through his own speech Speaking to Roderigo, he first invalidates the concept of loyalty, saying of Othello, "I follow him but to serve my turn upon him" (1.1. 39), and "In following him I follow but myself. / Heaven is my judge, not I for love or duty, but seeming so, for my peculiar end." (1.1.55-57) in which he invalidates not only duty, but also love. This also brings up the question of what Iago's "peculiar end" is. If Iago is the devil, his peculiar end would be the damnation of souls. Using other interpretations of Iago's characters, it is much more difficult to define what his "peculiar end" might be. Then, as if to dispell any doubt, he concludes with "I am not what I am" (1.1.63), which could be easily dismissed, if changed by one word to "I am not what I seem," as acknowledgement of his deceptive nature. ...read more.

Yield up, O Love, thy crown and hearted throne To tyrannous hate! Swell, bosom, with thy fraught, For 'tis of aspics' tongues. (3.3.444-447) Iago hears this and knows that Othello Iago is now ready to offer him his soul. Iago recognises this summoning of the devil, but it is Othello who first starts speaking in the language that reminds readers of the marriage ceremony. When Iago tries to calm him, saying "your mind may change" (3.3.449), Othello responds four times with the word "Nev'r" reminding us of the permanence of this change. He then kneels and pronounces "Now, by yond marble heaven, In the due reverence of a sacred vow I here engage my words", and Iago, kneeling as well, vows "Witness, you ever burning lights above... that Iago doth give up the execution of his wit, hands, heart to wronged Othello's service". The references to heaven, the sacred vow, the calling of witnesses from above, and the giving up of Iago's wit, hands, and heart, are all very recognisable as parts of a marriage ceremony. Also apparent are the similarities of Iago's speech to Desdemona's speech, just after her wedding, "And to his honors and his valiant parts did I my soul and fortunes consecrate" (1.3.248-249). During this ceremony, Othello and Iago kneel, one of the very few stage directions in the play. [ Shakespeare uses stage directions very sparingly, and when they are used it is often for symbolic actions essential to interpretation. ...read more.

Shapiro explains, "Iago has told Othello that Desdemona has betrayed him with Cassio. But Othello is inventing elaborate variation on the adultery theme when he transforms her into a 'public commoner' ". In the final scene, Othello recognises Iago for the devil that he is, spitting out "I look down towards his feet [looking for cloven hoofs] -but that's a fable. If thou be'st a devil, I cannot kill thee" (5.2.283-284), (which Iago does not deny, saying "I bleed sir, but not killed"). Othello even goes so far in his recognition of reality that he calls himself "Fool! Fool! Fool!" for falling for Iago's trickery. However, he still does not recognise his own part in his fall, calling himself "one that loved not wisely, but too well; Of one not easily jealous, but, being wrought, perplexed in the extreme" (5.2.340-342) and so dies, thinking of himself as an innocent man fooled and tormented to the point of insanity. Iago's part is Othello's fall was not nearly as great as Othello makes it out to be. In reality, Othello willingly offered his soul to the devil in marriage, and from that point on, maddae up all the evidence necessary to condemn his wife, and was unable to return towards salvation. Sources Bell, Millicent. (2002). Shakespeare's Tragic Skepticism. Yale University Press, New Haven and London. Bradley, A.C. (1904). Shakespearean Tragedy: Lectures on hamlet, Othello, King Lear, MacBeth. St. Martin's Press, New York. Shapiro, Stephen A. (1997). Othello's Desdemona. Gale Research. Smith, Bruce R. (1991). Homosexual Desire in Shakespeare's England: a cultural poetics. University of Chicago Press, Chicago. ?? ?? ?? ?? ...read more.