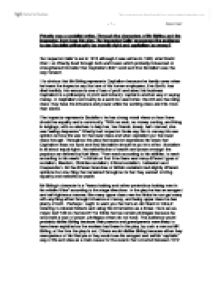 Priestly was a socialist writer. Through the characters of Mr Birling and the inspector, how does his play, 'An Inspector Calls' encourage the audience to see Socialist philosophy as morally right and capitalism as wrong? 'An Inspector Calls' is set in 1912 although it was written in 1945, after World War II so Priestly lived through both world wars which probably influenced or strengthened his belief that Capitalism didn't work and that Socialism was the way forward. It is obvious that Mr Birling represents Capitalism because he hardly cares when he hears the inspector say that one of his former employees, Eva Smith, has died horribly. His excuse is one of loss of profit and about his business. Capitalism is a philosophy of profit and industry: capital is another way of saying money. In Capitalism community is a word not used often: the rich are the ruling class; they have the influence and power while the working class are little more than slaves. The Inspector represents Socialism: he has strong moral views on how there should be equality and a community. "With no work, no money coming, and living in lodgings, with no relatives to help her, few friends, lonely, half- starved, she was feeling desperate." Priestly had Inspector Goole say this to convey his own opinion on how life was for the lower class and what capitalism put the lower class through. Throughout the play the inspector expresses his views that Capitalism does not work and how Socialism should be put into effect. Socialism is all about equal rights, the redistribution of wealth and power amongst the populous as defined by Karl Marx: "From each according to his abilities, to each according to his needs." ...read more.

In 1912 image was more important than quality or character - society turned a blind eye to what went on behind closed doors such as mistresses as long as outward appearances were maintained. Birling wants to climb the social ladder and seems to expect it as his right: he says to Gerald that he expects to become a knight soon. He sees himself as "a sound, useful party man" who will achieve honours if he can "keep out trouble during the next few months." He says this as a joke, but ironically, the Inspector enters almost immediately afterwards and informs them they are involved with a suicide. Birling didn't expect to be involved with anything disreputable, meaning he was sure that he would get the knighthood. Throughout the play Birling uses a number of tactics to try and dodge the blame, such as, lying, blaming others, making excuses, threatening the inspector and then when everything else failed he tried to bribe the inspector. Nothing Birling could do would put off the inspector's investigation. At the end of the play getting a knighthood seems almost impossible for Birling. When told that Birling had a part in Eva's death, he refuses to take responsibility: he is trying to find a way to keep hold of the prospect of his knighthood. This shows his greed. When he finds out the others' guilt he tries to minimise his responsibility. When it is apparent that the inspector wasn't a real inspector, he is relieved that there is still a chance of him becoming a knight. He also regains his arrogant and self assured composure. ...read more.

He uses the recent memory of the horrors of World War I and looks into the future at World War II to emphasise his view that they were a consequence of not embracing Socialism. The purpose of the play is obviously to show the audience of 1945 that Capitalism is wrong in many ways. By referring to contemporary events such as the sinking of the Titanic, the World Wars and the class system, Priestley encourages the audience to pay attention to his views. He also wanted the Birlings of the world to stop and think about their place in the wider community, people's rights and world peace rather than a life driven by greed, selfishness and refusing to take responsibility. The end of the play helps capitalists to stop and think because it shows that taking Capitalism to its logical conclusion of every man for himself has very real consequences: it encourages them to look at society as a whole and consider the bigger picture. The relevance of the play for today's audience is that Britain and the US, two of the worlds superpowers, are Capitalist countries and yet there are still wars and battles being fought over greed and selfishness and the thirst for power. A recent report by the United Nations found that the richest 2% of adults own more than half of the world's household wealth, while the poorest half own less than 1%. It seems that the world still isn't learning the lessons it should: perhaps we should heed Karl Marx more when he said that "Society is not made up of individuals" and balance our pursuit of a better life for ourselves with working for a better world for everyone. ?? ?? ?? ?? - 1 - Alex Carr ...read more.