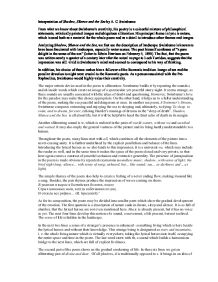 Interpretation of Shadow, Silence and the Sea by A. C. Swinburne

Interpretation of Shadow, Silence and the Sea by A. C. Swinburne From what we know about Swinburne's creativity, his poetry is a colourful mixture of philosophical statements, artistically painted images and ubiquitous alliteration. His principal theme in lyric is nature, which is used both as a material for the whole poem and as a detail to introduce other themes and images. Analyzing Shadow, Silence and the Sea, we first see the description of landscape. Swinburne is known to have been fascinated with landscapes, especially water scenes. The poet himself confesses of "a pure delight in the sense of the sea" (letter to Edwin Harrison on February 5, 1890). The fact, that the poem was written nearly a quarter of a century later after the actual voyage to Loch Torridon, suggests that the impression was still vivid in Swinburne's mind and seemed to correspond to his way of thinking. In addition, his choice of theme makes him a follower of the Romantic tradition. Image of sea and the peculiar devotion to night were crucial to the Romantic poets. ...read more.

Throughout the poem, many lines start with all, which combines all the elements of the picture into a never-ceasing unity. It is further underlined by the explicit parallelism and balance of the lines. Introducing the lyrical heroes as we also lends to this impression. It is a universal we, which may include the reader as well, and in the same time it makes the space of the poem closed and very private, so that here again comes a contrast of peaceful seclusion and extensive generality. The presence of juxtaposition in the poem is made obvious by repeated oxymorons (soundless music; shadow...with sense of light; the brief night long; silence... with sense of song; unheard, but... like sound; sea... as darkness and... as light). The simple rhymes of the poem also help to create a feeling of a never ending flow, making it sound like a song. Besides, the pair rhymes produce the impression of waves coming on shore: ? ??????? ? ????? ? ?????????? ???????, ????? ????? ???????? ????, ?????? ?????????? ?? ???, ? ?????? ...read more.

Other repeated sounds are th and t in through-thrilled-touch-throbbed, which builds an image of something living and moving. The dominating image here is the sea, which moves and produces sounds. It embodies the very pulse of life. Before it, we had mostly state verbs like be, watch and see, or no verbs at all, but now two verbs of sound appear, and this sound is dynamic and repetitive. The change from slumber to activeness also influences the syntactical structure of the verses. Earlier, the subject of every sentence was easy to notice, as it stood in the beginning of the line. However, the two last lines of the poem are in fact an anxious enumeration of attributes. Their succeeding one another at a rapid pace also helps to create the feeling of movement. It may seem strange, but the active sea does not disturb the silent night. On the contrary, the sea is shown as a part of it. On the whole, in Shadow, Silence and the Sea Swinburne uses visual an acoustic images to paint a marvelously done nightly landscape. He also infuses it with philosophical notions, which include hints on pantheism and show the nature as being universal and combining in itself incompatible notions. ...read more.