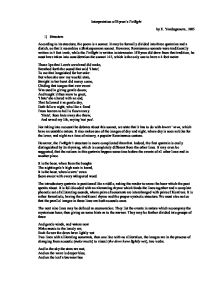 Interpretation of &quot;Twilight&quot; by Byron

Interpretation of Byron's Twilight by E. Yanduganova, 1085 1) Structure According to its structure, the poem is a sonnet. It may be formally divided into three quatrains and a distich, so that it resembles a Shakespearean sonnet. However, Renaissance sonnets were traditionally written in 5 feet iamb, while the Twilight is written in tetrameter. If Byron did draw from that tradition, he must have taken into consideration the sonnet 145, which is the only one to have a 4 feet meter. Those lips that Love's own hand did make, Breathed forth the sound that said 'I hate', To me that languished for her sake: But when she saw my woeful state, Straight in her heart did mercy come, Chiding that tongue that ever sweet Was used in giving gentle doom; And taught it thus anew to greet; 'I hate' she altered with an end, That followed it as gentle day, Doth follow night, who like a fiend From heaven to h**l is flown away. 'I hate', from hate away she threw, And saved my life, saying 'not you'. Not taking into account the debates about this sonnet, we state that it has to do with lovers' vows, which have an unstable nature. It also makes use of the images of day and night, where day is seen as bliss for the lover, and night as a time of misery, a popular Renaissance custom. ...read more.

and a verbal noun (decline) appear. The last line is suddenly pentameter, and due to its additional length it may be pronounced with either the slowliness or the rushness of surprise. In any case, it is a conclusion. We finally get the mysterious hour named, and in the same line it vanishes away. 2) Motives The Twilight is seemingly a poem about nature, which pictures the harmony of an evening landscape. Yet, some images are rather too persistent to allow this reading. Let us follow the alliteration. Reading the first quatrain, we find that sonorants express the theme of reciprocated and happy love (nightingale - the bird of love, its note, the whispered words, which appeal so much to the lyrical hero). The fricatives must refer to the notion of question which is being asked in these lines. Indeed, one may ask, why do the lovers' vows only seem sweet? Are they really sweet or are they hurting the hero? This is what the hero himself seems doubtful about. So, the hero has received a vow, maybe a promise of an assignation, from his lover, which has left him thinking. He has now just left the lover, so everything around him still bears the signs of his happiness at seeing the person (winds, waters, make, music - the labials again have the gentle nature). ...read more.

Byron's poetry is characterized by assuming night as a perfect time for making love and day as the time when all love must stop. In the context of the Twilight it may be proved by the fact that the word 'night' starts with a gentle sonorant and alliterates with nightingale and note. So, during the day the hero received a message with a double meaning (possibly, like the Shakespeare's lady, his lover said to him the ambiguous "I hate - not you"), and now he is anxious to know if his lover will come at night and reduce all the troubles of the day to nothing or if the message will prove to be hurtful and the lover will not come. The second part of the sonnet ends with line 13, tearing the rhyme in two. The half-rhyme is thrown forward like a hook for the lover to grasp. The hero comes to an abrupt stop in his meditations. At last the mood changes. Probably the hero sees his lover coming. He receives his answer, and it is a positive one. The twilight of his doubts vanishes, and the gentle sonorants again make their appearance (melt, moon, away). On the whole, although the images of nature are overall used to illustrate the hero's feelings and correspond to his mood, the Twilight is not only a landscape poem. It tells us a story of love and of a lover's fears. ...read more.