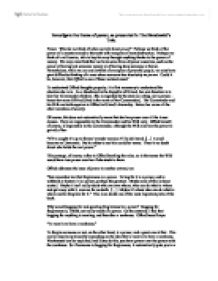 Investigate the theme of power, as presented in The Handmaid&amp;#146;s Tale.

Investigate the theme of power, as presented in The Handmaid's Tale. Power. What do we think of when we talk about power? Perhaps we think of the power of a country armed to the teeth with weapons of mass destruction. Perhaps we think of a millionaire, able to buy his way through anything thanks to the power of money. We may even think that we have some form of power ourselves, such as the power of having lent someone money or of having done someone a favour. Nevertheless, while we can easily think of examples of powerful people, we may have great difficulty thinking of a case where someone has absolutely no power. Could it be, however, that Offred is one of these isolated cases? To understand Offred thoughts properly, it is first necessary to understand the situation she is in. As a Handmaid in the Republic of Gilead, her sole function is to bear her Commander children. ...read more.

Maybe none of this is about control. Maybe it isn't really about who can own whom, who can do what to whom and get away with it, even as far as death. [...] Maybe it's about who can do what to whom and be forgiven for it." This is no doubt one of the most important parts of the book. Why would begging for and granting forgiveness be a power? Begging for forgiveness is, I think, not really much of a power. On the contrary, I feel that begging for anything is wanting, and therefore a weakness. Offred herself says: "To want is to have a weakness." To forgive someone or not, on the other hand, is a power, and a great one at that. This can be simply explained by expanding on the idea that to want is to have a weakness. Weaknesses can be exploited, and if you do this, you have power over the person with the weakness. ...read more.

The fact that he has also overstepped the line means that he too can suffer grave consequences if the relationship were to be exposed, even if by the Commander's Wife. As we read on in the book, we strongly notice how the 'balance of power' is shifting slowly from the Commander and the state to Offred herself. The more people need her (Nick also seems to want something from her) the more power she will have. The Republic of Gilead, of course, tried to remove all power from the Handmaids, but because they occupy such a vital position in society, they automatically have quite a lot of power over the whole of society. This theme of power changing hands was no doubt one of the main ideas that Margaret Atwood aimed to weave into her story. Personally, however, I feel that it tends to be overshadowed by the many other themes (most notably utopian society and gender politics) so that it really does lose a major part of its impact. Indeed, my main criticism of the whole book would be that there are so many things mixed into it that it is impossible to appreciate all aspects fully. ...read more.