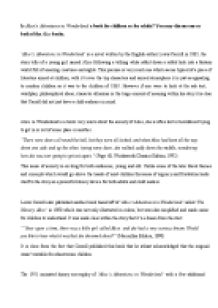 Is 'Alice's Adventures in Wonderland' a book for children or adults?

﻿Is Alice?s Adventures in Wonderland a book for children or for adults? You may discuss one or both of the Alice books. ?Alice?s Adventures in Wonderland? is a novel written by the English author Lewis Carroll in 1865, the story tells of a young girl named Alice following a talking white rabbit down a rabbit hole into a fantasy world full of amazing creatures and sights. This premise is very much one which seems typical of a piece of literature aimed at children, with it?s over the top characters and surreal atmosphere it is just as appealing to modern children as it was to the children of 1865. However if one were to look at the sub text, wordplay, philosophical ideas, character allusions or the huge amount of meaning within his story it is clear that Carroll did not just have a child audience in mind. Alice in Wonderland is a book very much about the anxiety of Alice, she is often lost or bewildered trying to get in or out of some place or another. ?There were doors all round the hall, but they were all locked; and when Alice had been all the way down one side and up the other, trying every door, she walked sadly down the middle, wondering how she was ever going to get out again.? (Page 40, Wordsworth Classics Edition, 1992) This sense of anxiety is exciting for both audiences, young and old. ...read more.

Alice?s Adventures in Wonderland represents the difficulties a child faces in the confusing world of adults. To grasp our world Alice has to move past the open mindedness that is characteristic for children. A younger audience would fail to grasp the social message that Lewis Carroll is putting across. Alice is a bit of a know-it-all in the first book. She?s keen to show off what she knows and is proud of knowing long words. When she is falling down the rabbit hole she wonders if she falling to the centre of the earth and also what latitude and longitude she?s at, ?though it was not a very good opportunity for showing off her knowledge, as there was no one to listen to her? (Page 39, Wordsworth Classics Edition, 1992). The tone of Through the Looking Glass (1871) however is more philosophical with Alice talking to herself more than she did during the first story and also doubting herself more, she often wonders if she is the one in someone else?s dream. Even from the start there are obvious differences: Alice starts of indoors, alone apart from her kitten, it?s winter with snow hitting the window. In Through the Looking glass the men are portrayed as being old and weak with Alice often helping them, there are a few different ways in which this could be interpreted. It was published 6 years after Alice?s Adventures in Wonderland and Carroll had likely grown attached to the idea of Alice?s childhood innocence, which was slipping away with Alice Liddell (Carroll?s inspiration for Alice) ...read more.

If Carroll really intended his books to be primarily read by children why would he have put in so much symbolism. Carroll even went to the trouble to publish a simplified, children?s only version. There are a lot of allusions to growing up, it would make sense to put these in as an author in some form if your audience were children who are slowly growing up. However Carroll does it in such a way that most children would not even understand all the different metaphors used, they would likely realize a difference in Alice over the two books but not much else. In Lewis Carroll?s biography he stated "I'm very much afraid I didn't mean anything but nonsense. Still, you know, words mean more than we mean to express when we use them; so a whole book ought to mean a great deal more than the writer means. So, whatever good meanings are in the book, I'm glad to accept as the meaning of the book." (The Life and Letters of Lewis Carroll, Collingwood, 1898). In this he wasn?t specifically talking about ?Alice?s Adventures in Wonderland? but this comment can be applied to many of his works including his two ?Alice? books. This statement is neither confirming nor denying whether ?Alice?s Adventures in Wonderland? is a book for children or for adults, Carroll likely intended both children and adults to enjoy his book. Some for the fantasy world and magical atmosphere. And others for the sub text and philosophical allusions. ...read more.