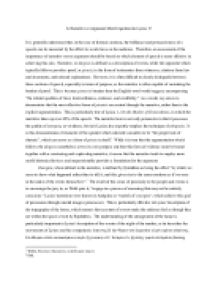 Is Narrative or Argument More Important in Lysias 1?

Ã¯Â»Â¿Is Narrative or Argument More Important in Lysias 1? It is generally understood that, in the case of forensic orations, the brilliance and persuasiveness of a speech can be measured by the effect its words have on the audience. Therefore, an assessment of the importance of narrative versus argument should be based on which element of speech is more effective in achieving this aim. Narrative, or diegesis is defined as a description of events, while the argument which typically follows provides proof, or pisteis, in the form of testimonies from witnesses, citations from law and documents, and rational explanations. However, it is often difficult to clearly distinguish between these sections of speech, especially in terms of purpose, as the narrative is often capable of sustaining the burden of proof. This is because pisteis is broader than the English word would suggest, encompassing â€œthe related qualities of trust, trustworthiness, credence, and credibility.â€ As a result, my aim is to demonstrate that the most effective forms of piesteis are created through the narrative, rather than in the explicit argumentation. This is particularly true of Lysias 1, On the Murder of Eratosthenes, in which the narrative takes up over 40% of the speech. The narrative here is not only persuasive in that it possesses the quality of energeia, or vividness, but in it Lysias also expertly employs the technique of ethopoiia. It is this demonstration of character of the speaker which Aristotle considers to be â€œthe proper task of rhetoricâ€, which can serve as a form of pisteis in itself.[1] While it is true that the argumentation which follows the diegesis nonetheless serves its own purpose and that this form of evidence must be bound together with a convincing and captivating narrative, it seems that the narrative tends to employ more useful rhetorical devices and unquestionably provides a foundation for the argument. ...read more.

The use of passives Ã¡Â½Ï†Î¸ÎµÃ¡Â¿ÏƒÎ± and Î´Î¹Î±Ï†Î¸ÎµÃŽÂ¯ÏÎµÏ„Î±Î¹ present Euphiletosâ€™ wife as a victim of Eratosthenesâ€™ persuasion: he is the only active agent in the moicheia. Often this character assasination is achieved through a technique called diabole, described by Carey as accusing an opponent of something â€œtangential or unrelatedâ€.[6] Apollodorus makes use of this rhetorical technique in his Against Neaira, both through his presentation of Stephanus as a sycophant, but also through his description of the early stages of Neairaâ€™s career, which seem apparently irrelevant to the case but serves to prejudice the jurors against her through a characterisation of a young girl eager to have sexual relationships. Apollodorus refers repeatedly to Neairaâ€™s sexual career, â€œbut always by means of periphrases.â€ In On the Murder of Eratosthenes, Lysias in section 28 declares that â€œthose who do not act justly not not acknowledge that their enemies speak the truthâ€ (Î¿Ã¡Â¼Â± Î¼Ã¡Â½Â´ Ï„Ã¡Â½Â° Î´ÃŽÂ¯ÎºÎ±Î¹Î± Ï€ÏÃŽÂ¬Ï„Ï„Î¿Î½Ï„ÎµÏ‚ Î¿Ã¡Â½Ï‡ Ã¡Â½Î¼Î¿Î»Î¿Î³Î¿Ã¡Â¿Â¦ÏƒÎ¹ Ï„Î¿Ã¡Â½ÂºÏ‚ Ã¡Â¼Ï‡Î¸ÏÎ¿Ã¡Â½ÂºÏ‚ Î»ÃŽÂ­Î³ÎµÎ¹Î½ Ã¡Â¼Î»Î·Î¸Ã¡Â¿). His use of the generic negative Î¼Î· suggests that those to whom he refers habitually act against justice. It has even been suggested that by doing this Lysias is making a connection between Eratosthenes and his family and the tyrant Eratosthenes, who belonged to the same tribe. These techniques help to contribute to the general feeling of enmity the speaker incites in the audience against his opponent. Overall, the effect of the characterisation of both the speaker and his opposition is to confirm â€œthe speakerâ€™s version of his case by presenting an implied argument from probabilityâ€.[7] Thus, the preliminary narrative can be utilized in the subsequent argument. Therefore, the combination of the vividness or energeia of the diegesis, which makes the information presented so convincing that it almost becomes fact to the listener, and the characterisation, both of the speaker and any opponents, results in the narrative acting as a foundation for the pisteis in the form of arguments based on probability. ...read more.

It therefore seems to be the case that the explicit argument based on Athenian law is not hugely persuasive as it allows for interpretations of the statutes and their use. Overall, it is clear that argument is often forced to rely on narrative techniques, especially in cases where proof based on witness statements, documents, and law is weak. It is also often observed that the presentation of information as an argument invites counter-arguments. Thus, explicitly stated arguments are more vulnerable to contradiction, while ideas subtly presented during the narrative and arguments based on probability, which prompt the audience to infer facts without being aware, are generally much more persuasive. In Lysias 1 in particular, the rhetorical techniques of enargeia and ethopoiia used in the narrative have this effect, and therefore form the foundation for the argument. Webb describes the impact of enargeia within the narration as â€œsimultaneously emotional and cognitiveâ€, giving the audience a fresh understanding of the people and events in question. Additionally, detailed character portrayals are established by Lysias with the effect of presenting credible evidence of Euphiletosâ€™ reliability while disposing the jury against Eratosthenes. Therefore, although these methods can only be effective when combined with proof, or pisteis, Lysiasâ€™ primary defensive strategy, that of the argument based on probability, relies on facts and assumptions established from the methods employed in the narrative, which are at the heart of persuasion. ________________ [1] Webb, Forensic Narratives in Athenian Courts [2] Ibid. [3] Webb, Ekphrasis, imagination, and persuasion in ancient rhetorical theory and practise [4] Carey, Rhetorical Means of Persuasion [5] Ibid. [6] Carey, Rhetorical Means of Persuasion [7] Ibid. [8] Webb, Ekphrasis, imagination, and persuasion in ancient rhetorical theory and practise [9] Fredal, The Enthymizing of Lysias [10] Carey, Rape and Adultery in Athenian Law [11] Ibid. ...read more.