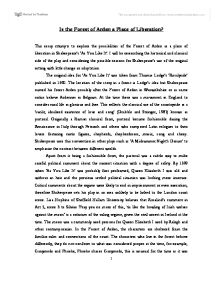 Is the Forest of Arden a Place of Liberation?

Is the Forest of Arden a Place of Liberation? This essay attempts to explore the possibilities of the Forest of Arden as a place of liberation in Shakespeare's 'As You Like It'. I will be researching the historical and classical side of the play and considering the possible reasons for Shakespeare's use of the original setting with little change or adaptation. The original idea for 'As You Like It' was taken from Thomas Lodge's 'Rosalynde' published in 1590. The location of the story in a forest is Lodge's idea but Shakespeare named his forest Arden possibly after the Forest of Arden in Warwickshire or as some critics believe Ardennes in Belgium. At the time there was a movement in England to consider rural life as glorious and free. This reflects the classical use of the countryside as a 'sunlit, idealized existence of love and song' (Drabble and Stringer, 1987) known as pastoral. Originally a Roman classical form, pastoral became fashionable during the Renaissance in Italy through Petrarch and others who composed Latin eclogues to their lovers featuring rustic figures, shepherds, shepherdesses, music, song and sheep. ...read more.

'But if thy love were ever like mine - As sure I think did never man love so - ' Silvius Act 2, Scene 4. Corin also has a lot of self respect and pride in what he does; 'I earn that I eat, get that I wear; owe no man hate, envy no mans happiness...and the greatest of my pride is to see my ewes graze and my lambs suck. Act 3, scene 2 The characters perceive the forest as a place of safety in troubled times and they view their life in the forest as a positive choice. 'Now go we in content to liberty, and not to banishment.' Act 1, scene 3. This comment is made by Celia as they leave the shelter of the castle. This reflects Celia's optimistic outlook. The Duke Senior too feels safe in the forest and he says in Act 2, scene i 'Are not these woods more free from peril than the envious court?' His admiration for the natural world ignores the privations of cold and loneliness finding 'tongues in trees, books in the running brooks, sermons in stones and good in everything' Act 2, scene 1. ...read more.

Rosalind is much more liberated by men's clothing and takes a masculine role, leading the expedition. 'But I must comfort the weaker vessel, as doublet and hose ought to show itself courageous to petticoat.' Act 2, scene 4. This shows Rosalind taking the lead and trying to show courage for Celia emphasising Shakespeare's view; men were in charge. The isolation from the court means that the natives live by different rules although they have some awareness of status as in Act 2, Scene 4 Touchstone refers to himself and Rosalind and Celia as 'your betters' to Corin and he replies 'else are they very wretched'. Although the duke and his men are dwelling in the forest they still keep their manners and courtly ways as gentlemen as Duke senior says to Orlando 'Art thou thus boldened, man by this distress? Or else a rude despiser of good manners,' Act 2, scene 7. Jacques is very melancholy character, does he not like the forest and prefers court? He maybe feels more imprisoned in the forest than he does in court because although throughout the forest he can come and go as he pleases he is unable to leave the forest and return to civilisation and the court. ...read more.