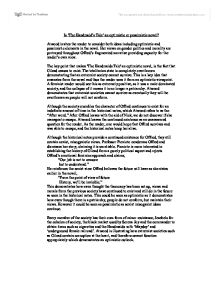 Is The Handmaid's Tale an optimistic or pessimistic novel?

Is 'The Handmaid's Tale' an optimistic or pessimistic novel? Atwood invites the reader to consider both ideas including optimistic and pessimistic elements in the novel. Her views on gender politics and morality are portrayed throughout Offred's fragmented narrative providing capacity for the reader's own view. The key point that makes 'The Handmaids Tale' an optimistic novel, is the fact that Gilead ceases to exist. The totalitarian state is completely overthrown demonstrating that an extremist society cannot survive. This is a key idea that emanates from the novel and thus the reader sees it from an optimistic viewpoint. A feminist reader would see this as extremely positive, as it was a male dominated society, and the collapse of it means it is no longer a patriarchy. Atwood demonstrates that extremist societies cannot survive as eventually they will be overthrown as people will not conform. Although the society crumbles the character of Offred continues to exist for an indefinite amount of time in the historical notes, which Atwood refers to as the "After word." ...read more.

However it could be seen as pessimistic as s****t misogynist ideas continue. Every member of the society has their own form of minor resistance; Jezebels for the echelon of society, the black market used by Serena Joy and the commander to obtain items such as cigarettes and the Handmaids with 'Mayday' and 'underground female railroad'. Atwood is illustrating how extremist societies such as Gilead contain corruption at the heart, and therefore cannot function appropriately which demonstrates an optimistic outlook. Another optimistic element of the society is illustrated by the women who work together to help and support each other. There is even a link with the subsequent Handmaids such as the message Offred finds; "Nolite te bastardes carborundorum." All the Handmaids are united and are supported by each other. Groups such as 'Mayday' and the 'underground female railroad' which the reader discovers in the historical notes, demonstrates the way the women unite to resist. However, the women in society are set against each other, especially the handmaids and the Econowives and jealousy is apparent; "The Econowives do not like us." ...read more.

It is clear by the end of the novel that Offred's individuality has survived as she retains her views and language and does not ultimately conform. She continues to notice feminine elements such as flowers and uses sensual language; "Soft and dry, like papier poudre, pink and powdery, from the time before." This is a complete contrast to her monotonous life as a Handmaid. Her fragmented narrative, especially the night sections, allows Offred to maintain her memories and keep her spirit alive. This is the time when she reflects on her past and demonstrates her love for her daughter; "My treasure...A shadow of a shadow, as dead mothers become. You can see it in her eyes: I am not there." A feminist reader would find this encouraging as a female has been able to retain her identity and capacity for love in a male-dominated society. It is clear by the ends of the novel that it contains both optimistic and pessimistic elements. The pessimistic views such as the portrayal of women and the s****t views combined with the optimism of the survival of the main character and destruction of the totalitarian society create an ideal balance. ...read more.