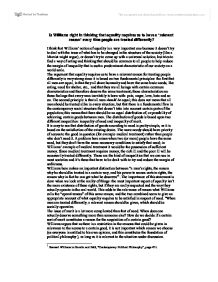 Is Williams right in thinking that equality requires us to have a 'relevant reason' every time people are treated differently?

Is Williams right in thinking that equality requires us to have a 'relevant reason' every time people are treated differently? I think that Williams' notion of equality is a very important one because it doesn't try to deal with the issue of what has to be changed in the structure of the society (like a Marxist might argue), or doesn't try to come up with a universal solution, but tries to find a way of acting and thinking that should be common to all people to help reduce the margin of inequality that is such a predominant characteristic of our society on a world scale. The argument that equality requires us to have a relevant reason for treating people differently is very strong since it is based on two fundamental principles: the first that all men are equal, in that they all share humanity and have the same basic needs, like eating, need for shelter, etc., and that they are all beings with certain common characteristics and therefore deserve the same treatment; these characteristics are those feelings that every man inevitably is born with: pain, anger, love, hate and so on. The second principle is that all men should be equal; this does not mean that all men should be treated alike in every situation, but that there is a fundamental flaw in the contemporary social structure that doesn't take into account certain parts of the population; this means that there should be an equal distribution of, or possibility of achieving, certain goods between men. ...read more.

not important which reason we choose (as everyone is entitled to his own opinion, and this constitutes the foundation of political philosophy ), as long as it is relevant to the situation under discussion. This issue forms the core of Williams argument and connects with what I said at the beginning: he calls for everyone to use his common sense and intelligence (it's a way of thinking and acting) to come up with relevant reasons to why people are treated in a different way. This will generate a series of useful discussions between people about how we should treat others; eventually an agreement should be reached and the margin of inequality should be reduced (it would be nearly impossible to eliminate all inequalities). Every situation is different, therefore it should be analysed and discussed, and every time an appropriate solution should be found, either in accordance to the idea of equal respect for unequal people, or in agreement with the ideal of equality of opportunity. Both of these ideas can be found to be very vague, but only if one doesn't examine the actual meaning of these two: the first deals with the notion of equality as a moral issue, alienated from those structures of the society that create inequality and give importance to material values like money, power and prestige. It can be better understood in Williams' words: " Each man is owed the effort of understanding, and in achieving it, each man is to be abstracted from certain conspicuous structures of inequality in which we can find them"2. ...read more.

Other people are around us and have the same needs and characteristics (not physical but metaphysical) as everyone else and they deserve as much respect and chances as all others. I think that unfortunately most societies are corrupt and unequal (this is pretty obvious). It is very unlikely to imagine an event that could change such a situation. However, differences and inequalities should be examined in every detail so that both it's present situation and how it came to be like this are clear. Once this is achieved, people should learn to respect differences in opinions and learn from them instead of rejecting them completely. It will be a combination of ideas of different people that may help to understand how to reduce these inequalities and bring a more just world. Though it is Utopian to think of a perfectly equal society, it is not Utopian to think that people might start thinking less selfishly and pay attention to other people's problems. Unfortunately in a capitalist society like ours everyone has to think of themselves first or they will be left behind. It is virtually impossible to not fall into Utopianism when we think of correcting the unfair society we live in. 1 Bernard Williams in Goodin and Petit, "Contemporary Political Philosophy", page 471. 2 Bernard Williams in Goodin and Petit, "Contemporary Political Philosophy", page 469 ?? ?? ?? ?? ...read more.